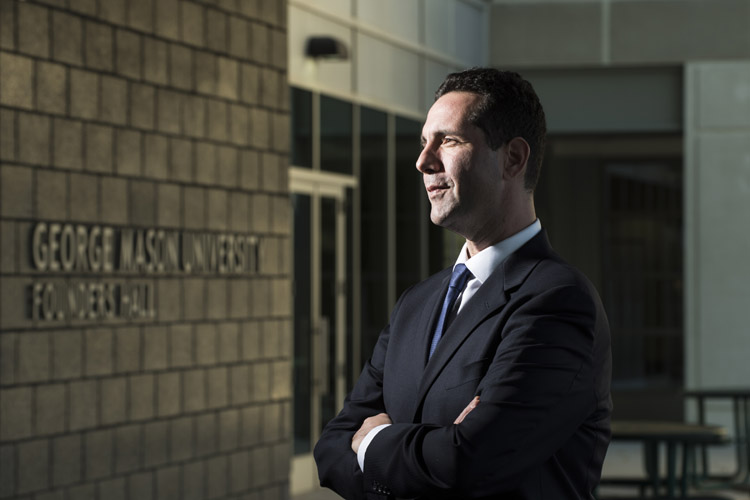 It took six years—eight, if you count the two to get the master’s degree—for Craig Wiener to receive his PhD in biodefense from George Mason University’s Schar School of Policy and Government.

Along the way he commuted thousands of miles from home to class, worked full time for the U.S. government, served as teaching assistant to one of the country’s foremost national security experts and got married to a George Mason alumna.

“Mason’s given me my wife, my friends, my mentors, my education and fulfilling national security work,” he said. “I’m very grateful.”

So grateful, in fact, he’d like to teach at Mason while working on national security issues for the United States. “It would be my way of giving back,” he said.

It’s a role he’s already taken on at Mason as a teaching assistant to Michael Hayden, the Schar School Distinguished Visiting Professor and former head of the CIA and National Security Agency.

After completing his undergraduate degree at New York University and landing a job in Washington, D.C., the Manhattan native was drawn to Mason because of the interdisciplinary offerings in his field.

He had an affinity for science—his master’s degree is in biodefense from Mason (his thesis was on synthetic biology)—and for national security.

“Mason had the only program of its type in the world that offered a PhD in biodefense that dealt with both the scientific aspects as well as the policy and nonproliferation and counter-proliferation aspects of CBRN.” CBRN is an acronym for chemical, biological, radiological and nuclear warfare.

Meanwhile, in addition to commuting from his then-home in Winchester, Va., to Mason’s Arlington Campus, and working full time at the Department of Energy’s National Nuclear Security Administration, Wiener was accepted as a nuclear scholar at the Center for Strategic and International Studies, “the number-one think tank for national security and defense in the world,” he said.

Wiener’s PhD dissertation, “Penetrate, Exploit, Disrupt, Destroy: The Rise of Computer Network Operations as a Major Military Innovation,” is groundbreaking, said Gregory Koblentz, director of Mason’s biodefense graduate program, and it has nothing to do with biodefense.

Koblentz said it’s usually the armed services that lead the way in military innovation, not the intelligence community. But Wiener’s use of newly declassified documents and new on-the-record interviews with NSA and CIA officials in his research was truly revolutionary, Koblentz said.

“The dissertation was a labor of love, and he had to fight an uphill battle within the bureaucracy to get access to the necessary materials to write it,” Koblentz added. “His persistence paid off. Craig's dissertation will make a significant contribution to the history of cyber warfare and the academic literature on military innovation.”

In his off hours, such as they are, Wiener plays guitar, reads and spends time with his new wife, Rachel (Barnhill) Wiener, who graduated from Mason with a master of public policy in 2014.

“She also came to Mason specifically for the nexus with intelligence professors,” Wiener said.