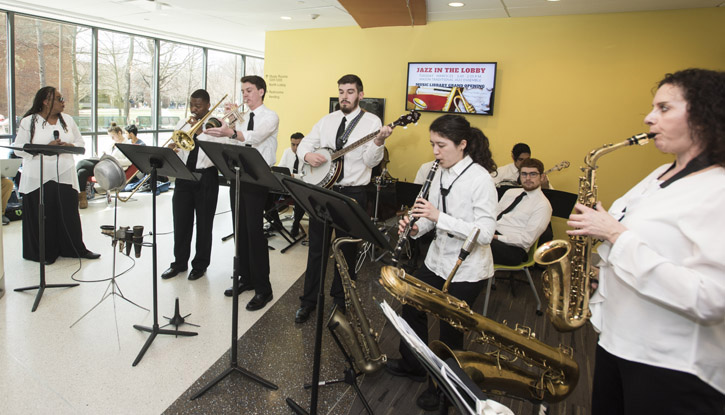 The thousands of materials in George Mason University’s Music Library are now back in their original home on the second floor of Fenwick Library.

Since the 1990s, the Music Library was spread across two floors in George Mason’s Gateway Library in the Johnson Center, but that setup wasn’t very conducive to browsing, said Steve Gerber, research librarian for music, theater and philosophy for University Libraries.

The Music Library’s return to Fenwick means it’s just down the hall from Special Collections, where music rarities are displayed.

The move was met with fanfare and music at the Music Library’s Open House on Tuesday, which featured performances by the Mason Traditional Jazz Ensemble in the lobby of Fenwick.

“It is days like today where we truly get to see how the libraries, in collaboration with other departments, function at the center of the university’s intellectual and cultural life,” said John G. Zenelis, dean of libraries and university librarian.

Marcelo Carrion, a guitar player and a senior majoring in jazz studies, was a part of the ensemble. He said his major requires him to spend time in the Music Library. He can listen to music from the Big Band era, check  out materials and play them when he works with other school musicians, he said.

“People now know there is a musical library right upstairs where they can discover more traditional types of music,” Carrion said.

Mason works with digital vendors like Alexander Street Press to make thousands of high-quality song recordings and chord charts available at no cost to the Mason community through the University Libraries website.

Students can easily clip sections of audio for music projects and reports, and share them with other students and their instructors, research librarian Gerber said.

Vinyl albums are making a comeback, he added, because listeners desire the warms sounds punctuated with the telltale cracks, hisses and pops. The Music Library now features a listening room complete with a player that converts vinyl album tracks to an MP3 format.

Rick Davis, dean of the College of Visual and Performing Arts, played an important role in the Music Library’s move, Gerber said.

"We are so pleased that the scholarly and performance library resources necessary for a first-class experience in a fine School of Music such as ours are now gathered together in such an inviting and inspiring space," Davis said. "This new Music Library will no doubt become a hub of artistic activity and collaboration, and lead to many discoveries both on stage and off."