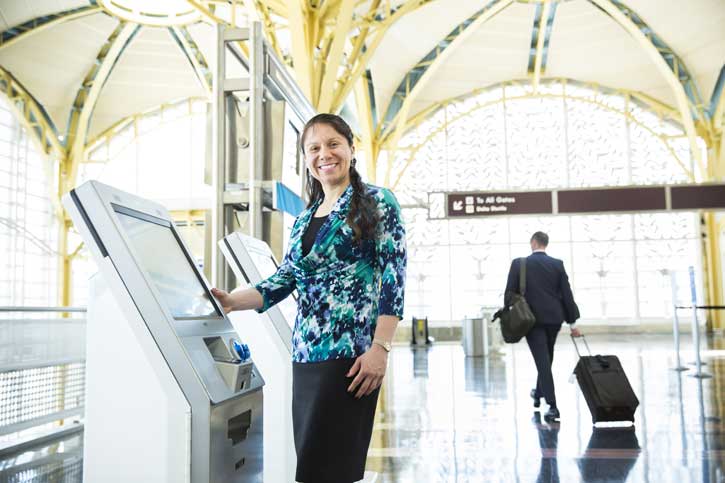 Nereyda Sevilla believes she has a way to change how authorities and the public respond to disease outbreaks perceived to be transmitted by air travel. If she’s right, it could potentially save billions of dollars in misdirected federal and state money and give millions of air passengers more precise information about infections.

Sevilla will graduate with a PhD this May from the Schar School of Policy and Government’s Biodefense Program at George Mason University.

Sevilla is a civilian aerospace physiologist for the Medical Research and Acquisitions Division in the Office of the Air Force Surgeon General, a position she landed after she left the Air Force as a captain. She graduated from the Air Force Academy and earned her master of public health degree from the Uniformed Services University of the Health Sciences, the combined military’s medical school.

During her 10 years in the military, she studied the effects of flying on the human body, whether on a fighter jet or transport aircraft.

When she realized the Post-9/11 GI Bill would pay 100 percent of her tuition for a PhD at a state school, Sevilla came across Mason’s Biodefense Program, “and I didn’t have to go any further,” she said. The accessibility and flexibility allowed her to continue her meaningful employment while allowing her to explore the intersection of science with policy.

Over eight years at two Mason campuses, Sevilla examined the role of air travel in the spread of diseases, specifically the threat of pneumonic plague as a natural outbreak or bioterrorist attack. She had plenty of examples to work with, including the Severe Acute Respiratory Syndrome pandemic of 2003 that killed more than 800 people across 37 countries, the 2009 Influenza H1N1 epidemic, and the most recent 2014 Ebola outbreak.

While aircraft are indeed moving individuals across the globe acting as vectors and incubators of diseases, Sevilla pointed out that despite the numerous aircraft involved, no one became infected with Ebola on an airplane. And yet authorities spent billions on entry and exit screenings, which heightened fear among the general population.

Sevilla used an open-source model to study what would happen during a possible future outbreak of pneumonic plague, an infectious lung disease that continues to rear its deadly head around the world. The model could be a game-changing tool, said her professor.

“The use of this tool allows Nereyda to go beyond lessons learned from previous outbreaks to proactively develop new public health approaches to containing outbreaks before they become global pandemics,” said Gregory Koblentz, director of Mason’s Biodefense Program.

The open-source model Sevilla built her plague program on is called the Spatiotemporal Epidemiological Modeler—STEM, for short. The multi-disciplinary, collaborative platform can be downloaded to any computer for use by researchers to compare, refine and validate scenarios anywhere in the world.

The bottom line for Sevilla? “I’m a huge proponent of communicating with and educating the public,” the Texas native said. “We can instill a better culture of travel preventive medicine practices, such as washing your hands in public places, and not just panic during a crisis.”

As for catching a cold in an airplane from another passenger?

“I’ve found the airplane is not what’s going to get you infected with disease,” she said. “You’re more likely to get sick from waiting in the boarding area next to someone with a cold.”