Class of 2017: Mason’s youngest graduate will be just 17 when she receives her master’s degree 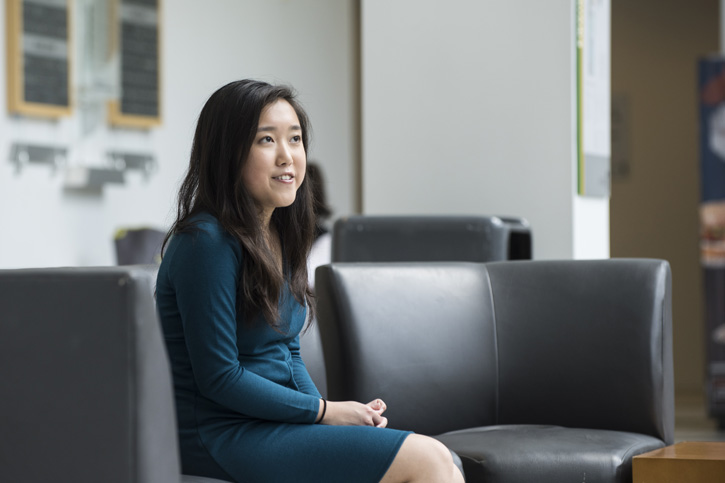 Stephanie Mui, 17, will graduate from Mason with a master's degree Saturday, May 20. Photo by: Ron Aira.

Stephanie Mui has been content to always run life at her own pace, even if it is a bit quicker than most.

At 17, the George Mason University student from the College of Science will be the university’s youngest graduate this weekend when she receives her master of science in mathematics. The Fairfax native had just completed the fifth grade when she first began taking college courses at Northern Virginia Community College and was 16 by the time she earned a BS in mathematics from George Mason in summer 2016.

More astonishing is that Mui simultaneously attends nearby Oakton High School when not in class at Mason. She won’t graduate from Oakton until June, meaning that she’ll soon hold undergraduate and master’s degrees from Mason prior to actually graduating from high school—or even getting her driver’s license.

“It’s really crazy,” she allowed, “but it’s been OK. I think my time management skills are pretty good.”

Mui, who plans to attend New York University this fall on a full research fellowship to begin work on a PhD in math, boasts a GPA of just below 4.0, with one A-minus in an English class here at Mason. Despite her academic achievements, she readily discounted any talk of being a genius.

“I started early and just from working hard and having that passion, all this naturally followed,” she said.

Math has come naturally to Mui, perhaps the result of both her parents being engineers.

She was in the first grade when she first began debating geometry proofs with her father and, by the fourth grade, she had already passed the College Board’s College-Level Examination Program (CLEP) for calculus.

She still has that same passion for math all these years later.

By the end of fifth grade, it was clear she needed more of a challenge, and began taking classes at NOVA, earning an associate’s degree by age 13. She earned enough credits to enroll at Mason as a junior by spring 2015.

“At that point, she was very mature already and intimidatingly smart,” said Sean Lawton, the associate professor for mathematical sciences who served as Mui’s mentor.

Worried that she might be treated differently, Mui concealed her age from her peers and teachers alike. She soon became a member of the school’s Experimental Geometry Lab and earned the opportunity to compete in the 2016 Intel International Science Engineering Fair, winning first place in the regional competition and $2,000 from the American Mathematics Society for her work embedding geometric surfaces in 3-D.

She still likes to hang out on the weekends with friends her own age, but math never strays too far from her thoughts.

“It’s kind of like the basis language of all the sciences—physics, engineering, chemistry—all that,” she said. “Math is the underlying thread to all those subjects. It can be applied to so many things.”