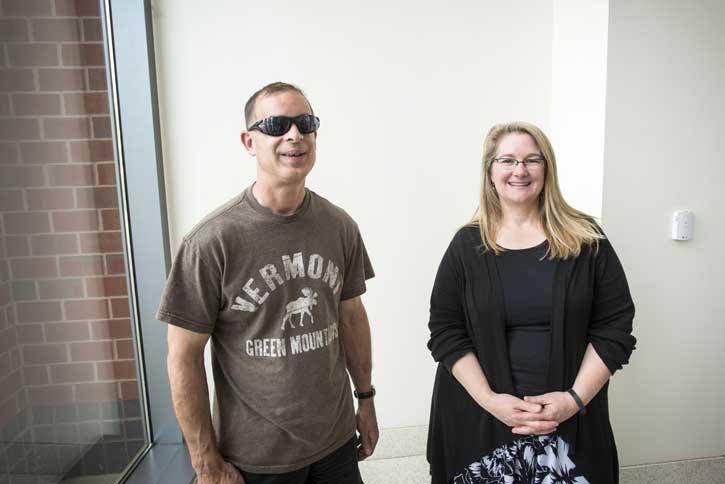 Andrew Salamone, PhD candidate, worked with Kelly Schrum, director of educational projects at the Center for History and New Media, to make a storytelling assignment accessible. Photo by Evan Cantwell.

Life is all about overcoming obstacles, and Andrew Salamone’s life is no different.

The George Mason University PhD student wanted to enroll in History 688: Digital Storytelling, but Salamone, who is visually impaired, wanted to make sure he would be able to do the course work and that the professor, Kelly Schrum, would be willing to make the curriculum more accessible to him.

One of the requirements of the course was for each student to make a 10-minute movie based on their academic research.

“She suggested, ‘Well, why don’t you create a podcast?’” Salamone said.

Since the point of the assignment was to tell the story using multimedia, “there’s more than one way to do that,” Schrum said. “Andrew really figured out how to give people from the past voices in this digital medium.”

Salamone drew from a 30-page research paper on the antebellum South to create an engaging podcast, which he narrated, that listeners outside of academia would find interesting.

“I quickly discovered that producing a digital story is completely different than writing a history paper,” Salamone said. “I brought in music from the 1800s. I had different people read newspaper articles and speeches, so you have an element of real people and not just words on a page.”

The podcast is called In Defense of the Revolution: Memory of the American Revolution in the Antebellum South.

Students in the digital storytelling class came from multiple disciplines, including history, higher education, sociology and rhetoric. They provided feedback on each other’s projects throughout the semester, Schrum said, and Salamone’s podcast was a big hit among the non-history students.

“The other students were so impressed. A number of students didn’t think history could be interesting, but they liked the way he told his story and wove together research, voices and ideas,” Schrum said.

Not every college course lends itself to being accessible to the visually impaired, especially those taught mainly with charts and graphs, said Salamone, who had both of his eyes removed before age five to prevent bilateral retinoblastoma, an aggressive cancer, from spreading to his brain.

He had some sight until age four, so he remembers colors. “And I remember what my mom looks like,” Salamone said.

His goal is to teach history at the university level. He currently works for the federal government and has earned two master’s degrees.

Pursuing a PhD wouldn’t have been possible without Schrum and others at George Mason, particularly Korey Singleton and the rest of Mason’s Assistive Technology Initiative team, he said. Singleton, a manager in George Mason’s Office of Compliance, Diversity and Ethics, works to convert textbooks and other print materials into accessible electronic files.

Salamone and Schrum are currently working on a reflective essay on their digital storytelling experience to help guide other students and professors who may encounter similar situations.