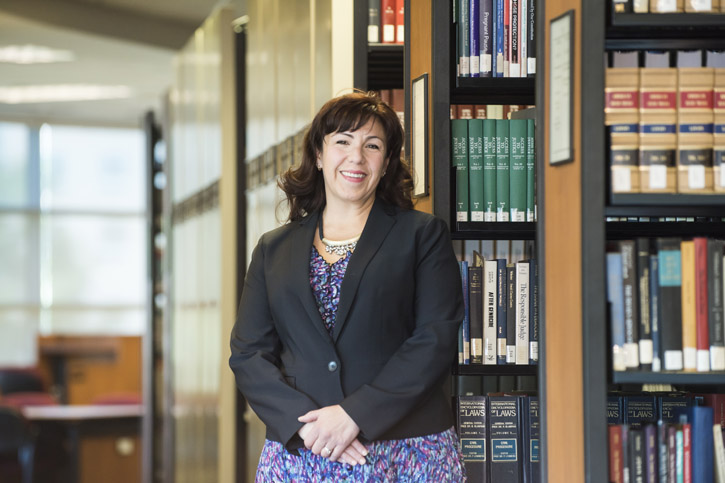 If Afghanistan joins the Berne Convention, a global copyright agreement, it will be, in part, because of the efforts of fourth-year law student Stephanie Semler. Photo by Ron Aira.

When Stephanie Semler volunteered to work for the Arts and Entertainment Advocacy Clinic at George Mason University’s Antonin Scalia Law School, she had no way of knowing that she would be attempting to encourage a country to join a major international treaty.

Semler prepared the groundwork for an effort to encourage the government of Afghanistan to join the Berne Convention, a global copyright agreement created in 1887. Thanks to her legal research and the determined diligence of the client, Virginia-based filmmaker Shabnam Humphrey, it could happen.

Humphrey is making a documentary about the life and work of renowned Afghan musician Ahmad Zahir, identified in 2010 by National Public Radio as one of the world’s “50 Great Voices.”

Protecting the documentary’s integrity is important to Humphrey, but preserving the artist’s legacy is also crucial: Zahir is her father. He died in 1979 at age 33, on the day she was born. For decades, she watched helplessly as her father’s music and the works of thousands of other Afghan artists were pirated and sold globally with no ramifications. She was determined to find a way to stop the exploitation and began to seek help.

At the recommendation of Karyn Temple Claggett, the acting Register of Copyrights at the U.S. Copyright Office, Humphrey contacted Sandra Aistars, director of George Mason’s Arts and Entertainment Advocacy Clinic. The clinic offers pro bono legal assistance to artists who have copyright dilemmas while also teaching Mason law students how to advocate in that field.

Aistars assigned Humphrey’s case to Semler, a fourth-year law student and a professor of philosophy at Northern Virginia Community College.

“I did the research to lay out a path as to what would make joining the Berne treaty possible,” said Semler. “I researched the law and looked at what problems might be solved if Afghanistan did join the Berne Convention.”

Semler had to learn the skills required to negotiate treaties and advocate for clients, as well as become familiar with legalese written in foreign languages.

Semler never imagined in her four years as a part-time law student that she would be negotiating international treaties.

“Absolutely not,” she said. “But it seems the way the laws are written in Afghanistan that it would not take much of an adaptation of the law to be Berne compliant. At least that’s the analysis we came up with in the clinic.”

The case has successfully made its way to the Afghanistan embassy in Washington, D.C., where it was heard by ambassador Hamdullah Mohib and cultural attaché Majeedullah Qarar. A decision is pending.

Humphrey is optimistic that Afghanistan will join the global treaty, which will afford protections to thousands of Afghan artists around the world.

“I have the utmost gratitude to the clinic from the bottom of my heart,” Humphrey said. “This could be a historic day for my country.”