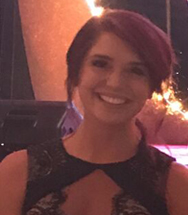 George Mason University’s Ashley Whimpey was living the dream on June 24, when she was named the winner of the Betty Endicott Scholarship at the Capital Emmy Awards.

Whimpey, a student media volunteer who has hosted and produced “And a Kitchen Sink” on the Mason Cable Network, edged out four other finalists to claim the $5,000 scholarship named in honor of the first female news director in Washington, D.C.

Whimpey, a rising senior communication major and a member of the Honors College, joined many of the Washington, D.C., area’s most prominent television journalists gathered at the Bethesda North Marriott Hotel and Conference Center.

“It was totally surreal,” she said.

Whimpey said the recognition validates her decision to leave her native Utah to attend Mason. Her parents fully supported her, but Whimpey said she relishes the opportunity to lighten their load.

“The big thing is that it means a lot to me being an out-of-state student,” she said. “It helps me knowing that I made the right choice coming all the way across the country, not accepting a full ride scholarship [to any Utah college] and coming to D.C., coming to Mason specifically and really taking advantage of the opportunities in the program.”

Rodger Smith, a professor in Mason’s Department of Communication, wasn’t surprised by Whimpey’s success. He taught Whimpey in two classes and was impressed with her drive, personable nature and strong organizational skills.

“She seems to have this natural talent for working in media,” Smith said. “I think the sky is the limit for her.”

The National Capital Chesapeake Bay Chapter of the National Academy of Television Arts awards the Betty Endicott Scholarship annually, and it is available to full-time undergraduate and graduate students from Washington, D.C., Maryland and Virginia. Undergraduate candidates must be communication or broadcast journalism majors. Graduate candidates must be pursuing advanced degrees in either field. All candidates must have a GPA of at least 3.0 and show a strong interest in communications or broadcast journalism.

Whimpey, who has a 3.96 GPA despite working several jobs, has served as the host, writer and producer for “And A Kitchen Sink” since her freshman year and just completed a yearlong internship with Mason’s Office of Communications and Marketing.

She hopes to someday become a television producer, run her own business or work in project management.