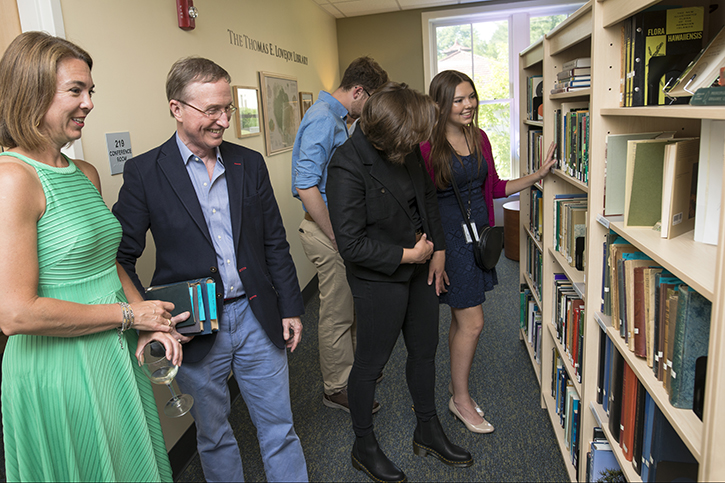 The Thomas E. Lovejoy Library, named for the “godfather” of biodiversity, is located in the Smithsonian-Mason School of Conservation (SMSC) in Front Royal.

“In the world of conservation, he’s like the Rolling Stones,” said Cody Edwards, the SMSC’s interim director. “He’s one of the founding fathers in that field, which is why having his library at the school makes a lot of sense.”

The library contains books and papers Lovejoy wrote about his extensive research and experience in the field. Lovejoy, a University Professor in the Department of Environmental Science and Policy, who coined the phrase “biological diversity,” supported moving his materials to the SMSC.

“The logic of providing an actual library on conservation biology was more than compelling,” said Lovejoy, who also held the biodiversity chair at the Heinz Center for Science, Economics and the Environment in Washington, D.C. “Having been engaged at Front Royal from the very outset makes this a very special honor to have it named for me.”

Lovejoy received his bachelor’s degree and PhD in biology from Yale. In 1965, Lovejoy was invited to study birds in the Amazon by his freshman-year advisor, ornithologist Philip Humphrey.

His trip to the Amazon influenced him to establish a conservation program at the World Wildlife Fund-U.S., which he led from 1973 to 1987.

Lovejoy has also served on the science and environmental councils under Presidents Ronald Reagan, George H.W. Bush and Bill Clinton, and currently serves as senior fellow at the United Nations Foundation.

In his speech at the library dedication, Lovejoy spoke about the importance of written words, especially books. He said he hopes to influence future generations seeking to learn and advance in conservation practices.