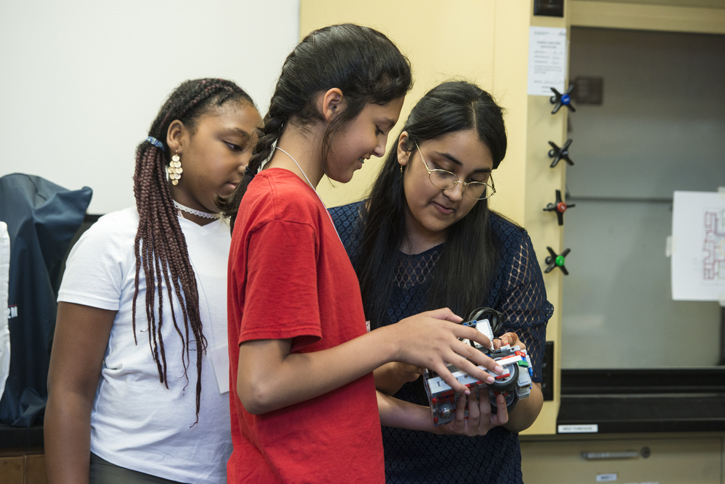 Girls learn about robotics through a hands-on experience at the STEM-FOCUS camp. Photo by Bethany Camp.

George Mason University’s Kelly Knight was 10 years old and attending Space Camp when she had an epiphany of sorts.

The daughter of an air traffic controller, she’d spent her time building rockets and performing science experiments in the backyard. It wasn’t until she became a little older that Knight realized she was usually the only person of color choosing activities involving science, technology, engineering and mathematics (STEM).

“I never saw anyone else who looked like me,” said Knight, now an assistant professor in George Mason’s Forensic Science Program. “I always felt like I stood out.” 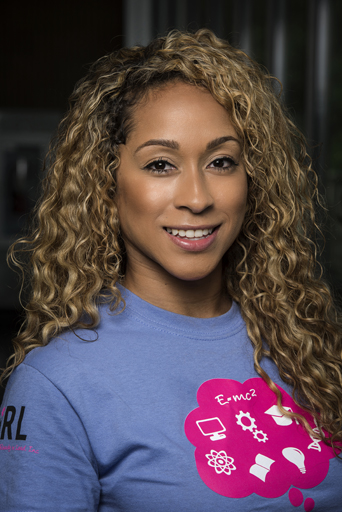 The purpose of Mason’s FOCUS (Females of Color and those Underrepresented in STEM) Camp, which took place June 26-30, is to empower 100 rising 6th-, 7th- and 8th-grade girls with a week of hands-on experience in various math and science disciplines, while making sure they never feel like Knight once did.

It will be critical, as the STEM field is growing faster than any other sector in the U.S. economy, according to the U.S. Bureau of Labor Statistics. Women—those of color in particular—remain vastly underrepresented, however, with many losing interest or growing discouraged before reaching high school.

Currently, 84 percent of American professionals in science or engineering jobs are white or Asian males, according to the most recent National Science Foundation statistics. At Mason, female minorities accounted for just 12 percent (662) of the school’s 5,640 STEM majors this past spring, according to university figures.

“When they see a woman—and especially a woman of color—in that STEM career, they are encouraged to continue pursuing their dreams of becoming an engineer, researcher or astronaut,” said Mason alumna Danielle Blunt Craddock, MAIS ’11, the founder of the nonprofit Girls Inspired and Ready to Lead that teamed with Mason’s STEM Accelerator Program to sponsor the camp. “They see the possibilities. I remember these words of Marion Wright Edelman, ‘You can’t be what you can’t see.’ ”

Knight, Blunt Craddock and the two other co-founders of the FOCUS Camp, biology professor Claudette Davis and Padmanabhan Seshaiyer, a mathematics professor who is also the director of Mason’s STEM Accelerator Program, hope to remedy that while offering proof that STEM disciplines can be both cool and fun.

“I strongly believe that the principal reason why we do not have many women and underrepresented minorities pursuing several of the STEM fields like computer science, physics, mathematics, engineering, etc. is because there aren’t more of them who are already pursuing such fields,” Seshaiyer said.

The girls appeared to enjoy the week of math and science classes that included sessions on how to code apps and how to do 3-D printing, among others. They learned important life skills and made new friends along the way.

And that was just the point, Knight said.

“Just to see 100 girls doing STEM is a powerful image,” she said.