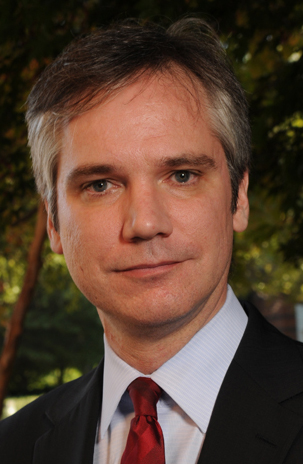 Climate change is one of the most crucial issues of our time, and one of the most complex. University Professor Andrew Light has captured international attention for his work in helping to create global solutions to this problem. In recognition of his work, the International Society for Environmental Ethics awarded him its inaugural Public Philosophy Award, and announced the award is to be renamed the Andrew Light Award for Public Philosophy.

In naming the award, the environmental ethics group focused primarily on Light’s work inside and outside government in creation of the 2016 Paris Agreement on Climate Change. On leave from George Mason from 2013-16, Light worked at the U.S. Department of State as one of the senior members of the delegation that negotiated the landmark agreement.

Ken Shockley, the Holmes Rolston III Chair in Environmental Ethics and Philosophy at Colorado State University, presented the Public Philosophy Award, noting Light’s extraordinary capacity for working across traditional barriers and boundaries, whether between disciplines or between public policy and academic work.

Light’s work on the Paris Agreement was also recognized in March 2016 with the inaugural Alain Locke Award for Public Philosophy, presented by the Society for the Advancement of American Philosophy. In July 2016, the U.S. Department of State awarded him a Superior Honor Award for “contributions to the U.S. effort that made the 21st Conference of the Parties to the UN Framework Convention on Climate Change in Paris, where the landmark Paris Agreement was concluded, a historic success.”

Light has been at Mason since 2008, and is director of the university’s Institute for Philosophy and Public Policy, in which leading ethicists and political scientists offer expertise on public policy issues, including peace and security, bioethics, climate change and other topics involving environmental sustainability.

One of the originators of the environmental pragmatism school of environmental ethics, Light has authored or edited 19 books and more than 100 articles, book chapters and policy reports. He also is a founding co-editor of the journal “Ethics, Policy, and Environment,” now in its 20th year.

“I’m humbled to be recognized in this way for my own work, but I’ll be really thrilled when I start to see people win this award who are working on issues that are completely different from what I’ve done,” Light said. “Providing important components to improve regional planning issues or working with local communities to establish their own sustainable agricultural systems. There are all kinds of ways in which people can embody what I think this award is trying to celebrate.”