In this program, sports are more than fun and games 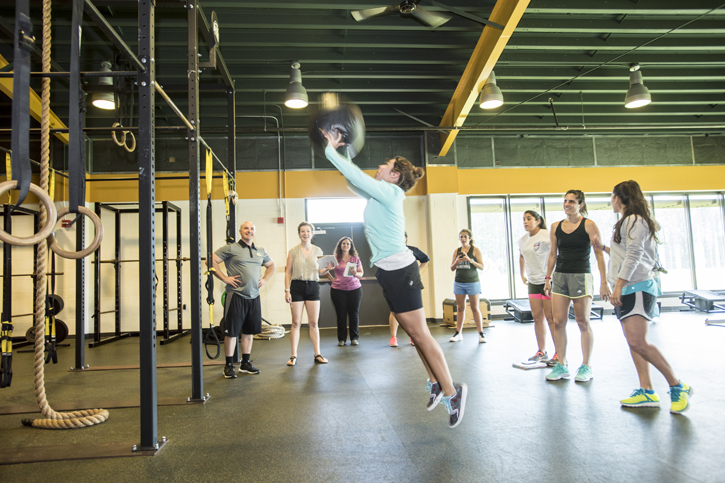 A group of 12 Argentinian female basketball coaches get in a quick workout at Mason's field house gym under the watchful eye of Mason strength and conditioning coordinator Handy Handerahan. The group is the latest to participate in Mason's Sport Diplomacy Program run through the university's Center for Sport Management. Photo by Ron Aira.

It was not unusual for Handy Handerahan, George Mason University’s head strength and conditioning coordinator, to be interrupted with questions as he spoke to a group of female basketball coaches.

The women did not want to waste the opportunity to gather as much information as they could from Handerahan about training techniques and philosophies.

“I want to learn about the whole setup of the program,” Janet Martinez said later through an interpreter. “I want to know how the athletes work and what their day-to-day lives are like.”

Martinez was one of 12 female coaches from Argentina visiting George Mason this month as part of the Sport Diplomacy initiative run out of the university’s Center for Sport Management. The program, which began in 2011, is funded through a cooperative agreement with the U.S. Department of State and brings athletes, coaches and sports administrators from around the world to Mason for workshops and discussions about leadership, training, nutrition, team-building, injury prevention, Title IX and inclusive sports.

There also is a good dose of immersion into American culture. The Argentinians, here from July 2-14, went to a Washington Nationals baseball game and saw the July 4 fireworks in Washington, D.C.

The Argentinians were the 74th group to come through the program. Israeli basketball coaches, on campus in late July were the 75th. Previous groups included snowboarders from Kyrgyzstan and players from the first female club basketball team in Saudi Arabia.

The groups stay in local hotels. Mason is responsible for the logistics and programming presentations, a task that also falls to co-principal investigator Pam Baker, program coordinators Niamh Connolly and Amanda Sabella, and program support specialist B. J. Durso.

The State Department pays for it all, including interpreters.

It is a highly visible program that puts Mason at the forefront in the sport diplomacy field, Baker said.

“It’s not only because of our relationship with the State Department,” he said. “From an academic standpoint, we’re leaders. We’re global leaders.”

But also part of something bigger, Handerahan said.

“Using sport as diplomacy as a way to make inroads with people is a big thing,” he said. “It allows people to put their guard down a little bit and we all unite in what we’re trying to learn about.”

The visitors are asked to develop an action plan that describes how they will use the information they learn back home and to whom they will speak about their experiences.

Follow-up interviews determine how much participants speak about their experiences and how their perceptions of American culture were affected.

“Consistently,” Baker said, “from the time they get here to the time they leave, we’re seeing a big growth in their perception and understanding of America.”

That was clearly expressed by the Argentinians.

“This exchange experience is such a wonderful gesture on the part of the citizens here, demonstrating the care and concern they have for us,” coach Marcela Margaria said through an interpreter. “The things I am learning here are going to show me the possibilities of what I can bring back home.” 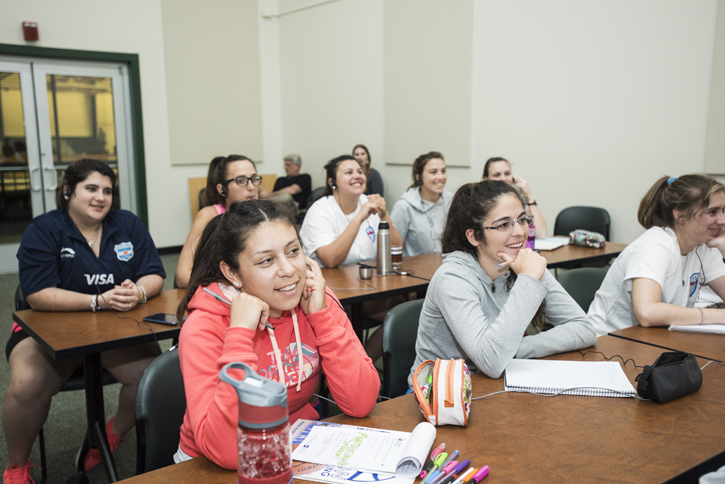 The coaches get a laugh while listening to Mason strength and conditioning coordinator Handy Handerahan explain training techniques and philosophies. Photo by Ron Aira.