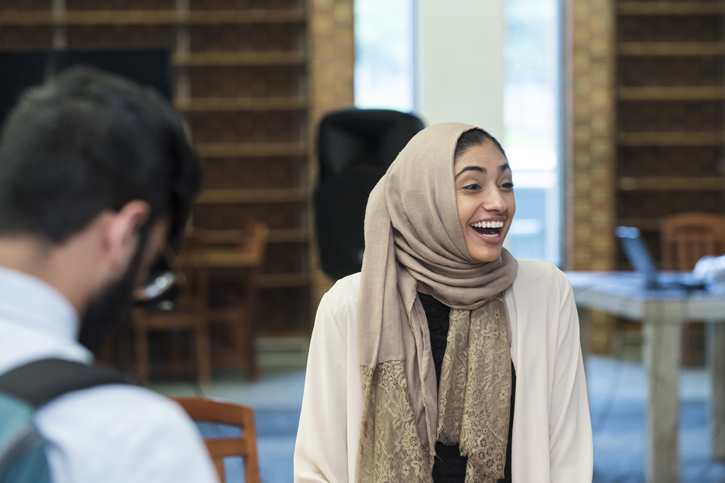 Sana Mahmood, founder of Veiled Beaut, at the Mix @ Fenwick. She and her team were part of the Mason Summer Entrepreneurship Accelerator program, where Mason students and recent graduates explored commercialization potential for their start-ups. Photo by Ron Aira.

George Mason University’s Sana Mahmood remembers what it was like to grow up as a young Muslim-American woman with limited apparel and accessory options.

“It was really hard finding clothing that fit our needs and trend sense, and also that corresponded to our values and beliefs,” the 22-year-old rising senior marketing major said.

To fill that niche and make a lasting, positive difference, Mahmood founded Veiled Beaut in April 2016 with the hopes of designing affordable and high-quality apparel for young Muslim-American women like herself who sought to dress stylishly and professionally in accordance with their Islamic faith.

Joining Mahmood on the Veiled Beaut team are fellow George Mason students Ibrahim Ahmad, a rising senior computer science major; Anmol Azhar, a rising senior information systems and operations management major; and Fatima Riaz, a rising senior global affairs major. They are among the 26 Mason students who took part in the inaugural Mason Summer Entrepreneurship Accelerator (MSEA) program based on “lean startup” methodology. Mahmood and her team hope to take their fledgling company to the next level.

Nick Rajpara was impressed from the outset and asked to serve as the group’s mentor this summer. The managing consultant from District Strategy, a Washington, D.C.-based business development and strategic consulting firm, said he likes everything he’s seen so far.

“What they’re doing is easy to understand, but at the same time, very innovative,” Rajpara said. “I see a market they could test right here in Northern Virginia with its large Muslim community.”

Fortune estimates the Islamic fashion industry will reach $484 billion in sales by 2019. There are approximately 3.3 million Muslims in the United States, nearly half of whom are women, according to the Pew Research Center. Nearly two-thirds of Muslims worldwide are younger than 30.

Chief among the tenets for the MSEA program is intensive customer discovery requiring each team to conduct at least 100 interviews to fine-tune their product-market fit and go-to-market strategy. During some of those interviews, the Veiled Beaut team discovered that potential customers sought active-wear hijabs to be worn during physical workouts.

“Marketing is my field and I feel like I’ve learned so much more already,” Ahmad said.

When the company began last year, it sold Kimono Islamic dresses and hijabs. As news of Veiled Beaut’s services spread through social media and word of mouth, business increased, and the company now offers an array of clothes and accessories, and also fulfills special requests. A new line of fall clothing is forthcoming, Mahmood said.

“It’s a very lucrative market and it’s fairly untapped in the West,” she said.

Influenced by her parents about the importance of making a positive social difference, Mahmood traveled to Jordan last summer with a nonprofit group called Helping Hand and worked with Syrian and Palestinian refugees, including orphans. She decided to contribute 10 percent of Veiled Beaut’s profits to organizations that provide relief services to refugees.

“It’s extremely important for us to use our platform to spread good, stand for justice and extend a helping hand to others,” she wrote in her company’s MSEA application. “We want to be more than just another company selling products—we want to initiate a positive ripple effect of much-needed change.”