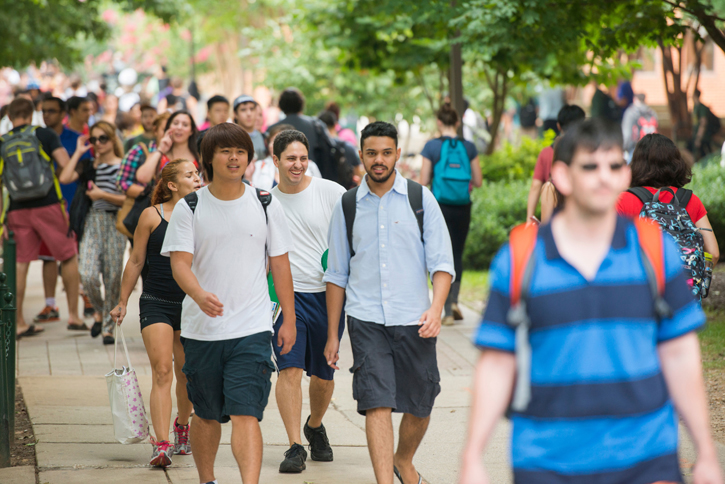 U.S. News & World Report cited George Mason University as the top-ranked institution in Virginia for campus diversity in its 2018 rankings of colleges and universities that were released Tuesday.

The university also moved up in the publication’s overall national rankings and is ranked as one of the nation’s best schools for creating an environment in which all students can thrive.

The rankings, which are closely followed by prospective students and their families across the country, reinforce George Mason’s commitment to inclusion and access while accentuating its role as a nationally recognized world-class research university.

In evaluating campus diversity, U.S. News looked at the proportion of minority students and the overall mix of groups in each institution’s 2016-17 student body. The formula produced an index of 0.0 to 1.0. The closer a school’s number to 1.0, the more diverse the student population.

“We consistently hear from graduating seniors that the opportunity to learn with and about others with different cultural, religious, and socioeconomic backgrounds has been a significant part of their deep learning at Mason,” said Rose Pascarell, Mason’s vice president for University Life. “That learning shows up in the richness of classroom discussions, the significant number of culturally based student organizations, and the range of opportunities for engagement, activism and education outside the classroom.”

Mason’s overall national rank rose three spots to 140. And it was listed as one of just 97 institutions in a category U.S. News calls “A+ Schools for B Students,” which identifies universities “where spirit and hard work make all the difference.”

Mason’s undergraduate business programs were tied for 78th nationally. Mason also was among 19 schools noted for stressing writing in all its disciplines. Check back for additional ranking details as they become available.

The university was recently ranked fifth nationally by Washington Monthly magazine as a best four-year college for adult learners. It also awarded more bachelor’s degrees to minority students in the 2016-17 academic year than any other Virginia institution, according to data presented by Diverse Issues in Higher Education.