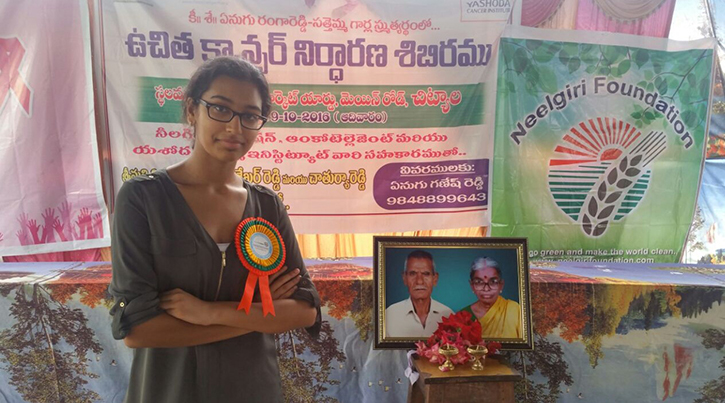 Chathurya Anuga stands next to a photo of her grandparents, Ranga Reddy Anuga (left) and Sathamma Anuga (right). Behind her are the posters of the organizations that helped organize the medical camp as well as the poster for the camp. Photo provided.

She was born on the 11th day of her late grandmother’s pedda karma, a Hindu ritual performed in the days following a death.

Some 18 years later, Chathurya Anuga’s penchant for generously helping strangers is a trait from her grandmother that family members say they can see in her.

Last year, Anuga worked with two nonprofits, the Neelgiri Foundation and Oncotelligent, and two hospitals to organize a medical clinic in her grandparents’ home village in India. The clinic provided locals with screenings for cancer, the same condition that caused both of her grandparents’ deaths.

“All of the nonprofits were partners with each other, so I asked them to partner with me,” said Anuga.

Much of the planning for the clinic was done by phone from her home in Gainesville, Va., but she took a week off from school in October to travel to India to help with the clinic in person.

Nurses, volunteers and doctors, including several oncologists, were on hand to conduct screenings from a mobile bus fully equipped with all the necessary medical equipment.

“I did everything to make sure the camp ran smoothly. I helped people to and from the bus and explained what [services] they could get done,” Anuga said. “I was shocked so many people showed up because there was a big festival that day.”

It turns out between 150 and 200 patients were seen at the clinic she organized. Anuga said she was happy to see advertisements for the clinic, especially because they said the clinic was being held in memory of her grandparents.

“In India, many people die of treatable conditions because by the time they seek help, it’s too late,” said Anuga.

Disease awareness is something she cares a lot about.

“It upsets me to see people who could have gotten better with an early screening process but couldn’t afford it, or were unaware of the symptoms and impact on themselves and their families [until] it was too late,” she said. “Anything that people can do to be healthy, they should do.”

As a University Scholar at George Mason University, Anuga receives four years of paid tuition. She is majoring in biology in hopes she can one day become a doctor.

“I chose Mason because it’s a well-known public research university and I’m interested in medical research,” said Anuga, a member of George Mason's Honors College. She also had attended the Governor’s School @ Innovation Park, which is hosted on Mason’s Science and Technology Campus in Manassas.

“I saw that [Mason] has a lot of opportunities because of its location. I can balance out my life pretty well here. I can do internships, volunteer work and social work while maintaining a balance with my academics,” she said.

She hopes that Mason will be a bigger platform for her efforts to create more mobile medical camps or clinics.

“The camps can happen anywhere. It doesn’t have to be in India—anywhere people are underprivileged,” she said. 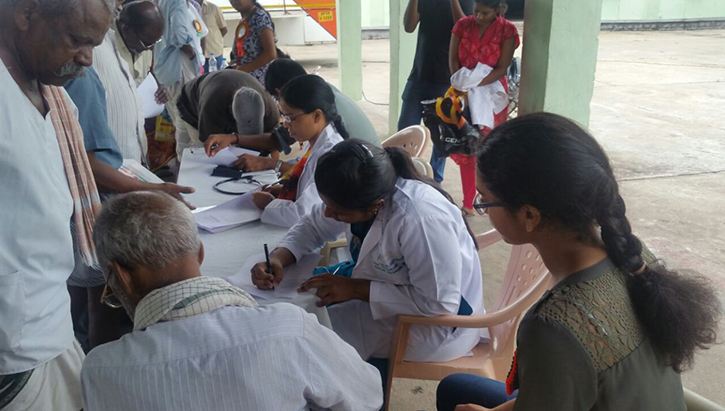