‘Clout: Womanpower and Politics’ at the Schar School 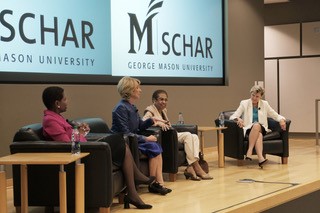 The second annual Tolchin Symposium at Mason’s Schar School in Arlington on Oct. 17 featured a panel of women in powerful positions discussing why more women are not in positions of power.

The symposium is named in honor of the late Mason political science professor Susan Tolchin who, with her husband Martin, founder and publisher of The Hill newspaper, wrote the book “Clout: Womanpower and Politics” in 1974.

The symposium was part of the school's Gender and Policy initiative led by Professors Bonnie Stabile and Toni-Michelle Travis.