Mason scientists take aim for a breakthrough in anthrax treatment 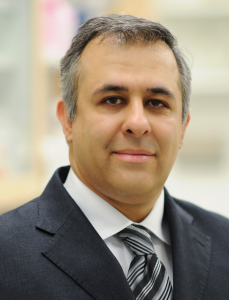 It’s a remedy he hopes will never be needed, but George Mason University’s Ramin Hakami knows the importance of being prepared.

Hakami, an associate professor of molecular and microbiology and infectious diseases within George Mason’s School of Systems Biology, has received a two-year National Institutes of Health grant totaling $600,000 from the Department of Health and Human Services to better combat anthrax infection. Hakami’s research could potentially quickly eliminate the adverse effects of its potentially fatal toxins while also tagging the anthrax bacteria itself for destruction. The work is part of a collaborative effort with Rajan Adhikari of Maryland-based Integrated BioTherapeutics Inc. and Daniel Nelson at the University of Maryland.

“The best-case scenario is that when we have patients with anthrax, we can treat them to remove the infection and get those patients back to good health,” Hakami said.

Anthrax is an infectious disease caused by rod-shaped bacteria called Bacillus anthracis. It is a re-emerging disease, and anthrax spores can be found naturally in soil and regularly affect domestic and wild animals around the world. People typically become infected by coming into contact with contaminated animal products, but some anthrax infections also occur by breathing in its spores or by eating or drinking contaminated food or drink. Anthrax makes for an attractive bioterrorism agent because of its ability to form spores that are difficult to kill and that can survive in the environment for decades. Such was the case during the infamous Amerithrax attacks of 2001 that immediately followed the Sept. 11 terrorist attacks.

Left untreated, anthrax can cause severe illness or even death. Antibiotics are ineffective against the harmful anthrax toxins and spores. In addition, current therapeutics are not highly effective in post-infection treatments, Hakami said.

That’s what he hopes to change with the help of Mason biosciences PhD candidate Farhang Alem and the outside collaborators on this project.

The project is still in its early stages, but the researchers' goal is to develop a better, more effective therapy for people who have been exposed to anthrax. They hope to achieve this by using what they call Infection Site Targeted Antitoxin Antibodies, which bind to the cell wall of the anthrax bacteria and deliver neutralizing anti-toxin antibodies directly to the source to prevent the toxin’s spread to other parts of the body.

“In the event of an infection, these engineered antibodies become attached to the bacteria via their highly specific binding domains,” Hakami said. “When the bacteria releases toxins, you have the antibody against that toxin right there to neutralize it quickly before the toxin spreads.”

The antibodies also tag the bacteria for destruction by the body’s immune cells, he said.

“The method that we’re pursuing has the potential to be effective post-infection and also should not be influenced by antibiotic resistance issues,” Alem said.

The therapy’s effectiveness could depend on a number of factors, including the degree of infection, strength of immune system and time passed before initial treatment, Hakami said.

The researchers are already using this approach to treat other toxin-related ailments.