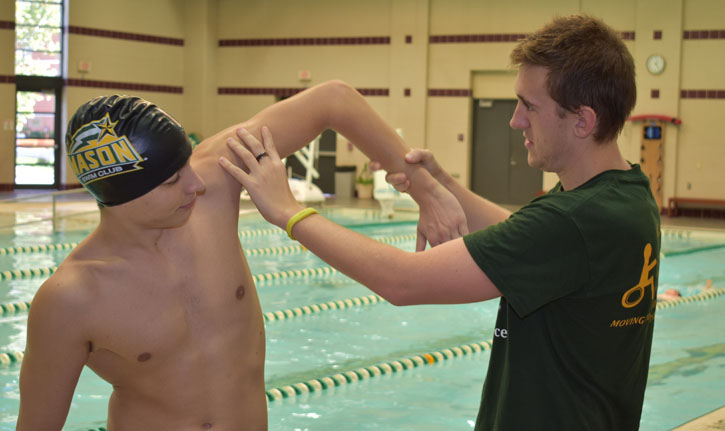 Josh Gordon, right, swimmer and rehabilitation science major, completed a research project on the mechanics of a swimmer’s shoulder as part of the class Applied Biomechanics in Rehabilitation. Photo by Ashley Jean

The love of swimming isn’t what led Josh Gordon to study rehabilitation science, but it does help him better understand the daunting physical challenges faced by patients in rehab.

Gordon, a senior at George Mason University and the president of the Mason Swim Club, has swum multiple marathons, that is, any race of 10 kilometers (six miles) or more, including the 15- and 18-mile stages of the seven-stage, 8 Bridges Hudson River Swim near Manhattan this summer.

As an aspiring physical therapist, Gordon said swimming helps him understand the importance of patient support throughout the rehabilitation process.

“I’m going to be there to support them. I’m not there to push them further than they can go, because I understand the body’s limitations,” he said.

Gordon is one of the first Mason students to major in rehabilitation science, a part of the College of Health and Human Services. He transferred from integrative studies to the budding program as a junior in fall 2016.

He managed to incorporate his love of swimming into his studies by doing a research project on the mechanics of a swimmer’s shoulder for the course RHBS 345: Applied Biomechanics in Rehabilitation.

“I learned about the forces and physics of what goes on inside of someone’s body while they are moving,” he said. “It’s something I’d experienced every day while swimming, but had never really thought about what’s actually going on.”

Rehab science professor Clint Wutzke, Gordon’s instructor for the course, says he always encourages his students to apply the concepts they use in class to their everyday lives.

“For Josh and his avid swimming, to be able to apply some of the biomechanical principles that we discussed to avoid overuse injury or to make sure that he can avoid injury while training, I think it was a great idea,” Wutzke said.

“You do feel very accomplished at the end,” Gordon said of swimming a marathon or a race. “You think, ‘Yeah, I just did that. I pushed my body to a point that very few people can also do.’”

After finishing his undergraduate degree, Gordon said he plans on pursuing a Rehabilitation Science Graduate Certificate from Mason before applying to physical therapy graduate programs. The certificate program is roughly equivalent to the first year of Mason’s rehab science PhD program.

Andrew Guccione, chair of Mason’s Rehabilitation Science Department, said the graduate certificate helps students improve their chances when applying for admission to a physical therapy or occupational therapy program, because what students gain from the program can be reflected in their admissions essays.

“These programs are extremely selective, even to getting an interview, let alone an offer of admission,” said Guccione.