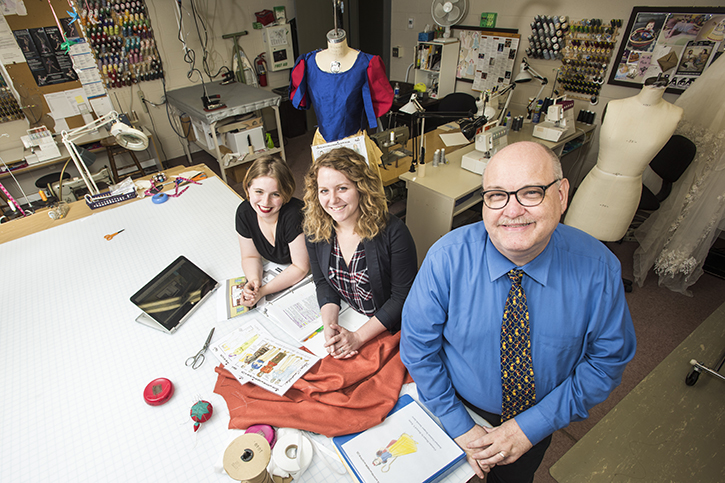 Howard Kurtz, Professor of Theater and head of the Theater Design program, right, is retiring at the end of the year, but he remains busy mentoring students like Alex Wade (left) and Amanda Jarvis (center). Photo by Ron Aira.

Howard Kurtz, professor of design in George Mason University’s School of Theater, refuses to use the word “retirement” as he anticipates the end of his teaching career here in June 2018.

For a while, he wasn’t sure what term to use to describe leaving George Mason, until a former theater student, Maggie Rodgers, put the whole thing into perspective for him, Kurtz said.

So he now says he is “graduating” from Mason after 25 years. It’s a beginning, not an ending, said Kurtz, who in December will also leave the Hillwood Museum in Washington, D.C., after 20 years. He and his husband, Howard Jaffe, both say they are looking forward to returning to Kurtz’s native Pennsylvania.

Both are working with him on the production of the comedy “Vanya and Sonia and Masha and Spike” at The Little Theatre of Alexandria, on stage from 0ct. 21-Nov. 11.

“We had to basically figure out how to put a farmhouse together on a stage, on a community [theater] budget,” said Wade, a theater major with a technical and design concentration.

She’s been working with Kurtz as the assistant set designer on the project since May.

“Howard has a very artistic eye, but he wants other people’s opinions first. He gave me artistic freedom, which I really like because I’m just learning how to do this,” Wade said.

“Mentoring is not someone telling you what to do—it’s communication,” Kurtz said.

It’s a way for her to get exposure and experience, Wade said.

“I’m putting my name out there and Howard’s helping me put my name out there; with each show that I assistant design for him, that’s one more person seeing what I can do as an up-and-coming professional,” Wade said.

Kurtz said he really wants to take students beyond the university, so whenever he’s involved in a project, then his students are there right along with him.

“I really want to immerse them,” he said. “If I have these connections then why am I not sharing them with the students? You can’t keep telling a student to get a job—take them with you.”

Jarvis, who is taking three classes this semester with Kurtz including an independent study on costume construction and pattern drafting, said she’s been the assistant costume designer for a couple of productions at Mason.

“For technical stuff, it’s just better to do it instead of talking about it,” said Jarvis, a senior design and technical theater major with a focus on costume design.

Jarvis also worked alongside Kurtz at the Hillwood Museum this summer as a costume and textile intern.

“I taught her to look at the inside of a garment to determine more about it and who made it,” Kurtz said.

His students’ success makes him proud. Kurtz said he recently got an email from a student saying, “Thank you for reminding me that I shouldn’t try to have a fishbowl when I can have an ocean.”

“I’ll always have a connection with this university, with the College of Visual and Performing Arts, the theater,” he said. “There’s more. There’s more out there, and I have to find it.”