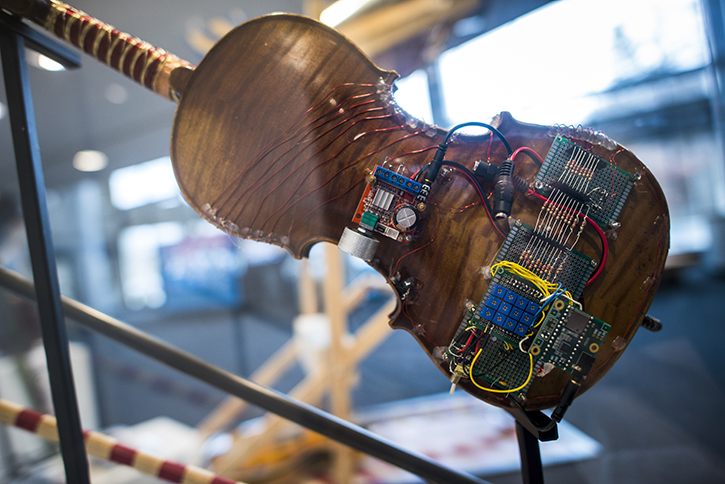 A digital theramin violin is part of the Narrative Machine exhibit in the Center for the Arts. Photo by Evan Cantwell.

An engineering professor and an art professor have embarked on an ambitious project: They want to create an orchestra of robotic gadgets made of cast-off musical instruments that will autonomously perform an opera bearing a topical social message.

“That is my dream, that is what we are working toward,” said Edgar Endress, an associate professor at Mason’s School of Art in the College of Visual and Performing Arts.

The first musical fruits of their labor are on display in the foyer of Mason’s Center for the Arts Concert Hall on the Fairfax Campus. It’s called the Narrative Machine and will be on exhibit until Feb. 10.

As of now, the orchestra is a small band consisting of two guitar towers, a horn flower, a cello drum, a piano guitar and a digital theremin violin. The instruments were among those donated to the Mason Community Arts Academy’s (formerly the Potomac Arts Academy) “Instruments in the Attic” program, in which refurbished musical instruments are loaned to community members and Mason students in need of an instrument for music studies.

The instruments in the Narrative Machine were deemed beyond repair—but not beyond their usefulness to the Mason professors.

The digital theremin violin was the first contraption created by the team in mid-December. An 1805 Seidel violin was outfitted with a wire coil, alternating pole magnets, speakers and other electronic parts. With the push of a button, a bow is stroked over the violin’s bridge, creating a decidedly un-violin-like sound. Computer software turns it into music.

No strings are plucked on the cello drum. Instead, linear actuators strike different parts of the cello’s fretboard and body, producing percussive sounds controlled by a musical instrument digital interface (MIDI). You can see Lofaro demonstrating it here.

There are two guitar towers among the instruments on display. Actuators, connected to an electric keyboard by means of a MIDI, strike the strings of a well-used Fender Stratocaster electric guitar. The sound is amplified by a large megaphone atop the tower.

When the full orchestra is ready for its operatic debut, Lofaro said there will be 16 guitar towers looming over the stage, playing along side an assortment of other colorful, Dr. Seuss-like hybrid instruments. Some of the instruments were designed with the help of students who participated in hack-a-thons.

Endress said there may be as many as 50 different instruments on stage.

“Imagine all the extension cords,” he added with a laugh.

The music, he said, could be created from sources reflecting topical social issues.

“Any data can be turned into music,” he said. “The libretto could be about housing or displacement, and the data could come from a housing project or from people telling a story about homelessness and displacement. That’s my dream.”

There is no timeframe for the performance, Lofaro said, but funding would help pick up the pace.

“We can do it for $25,000 if we do the work ourselves,” he said, adding that “robots are expensive, but this is excessively cheap.”

“We have all the machines,” Endress said. “It can be $25,000 if people donate their time to build the instruments. But we also have to think about transporting them, building crates, renting trucks.”

But $100,000 would permit the hiring of a graduate assistant and paying for additional help—and that would be music to Lofaro and Endress’ ears. 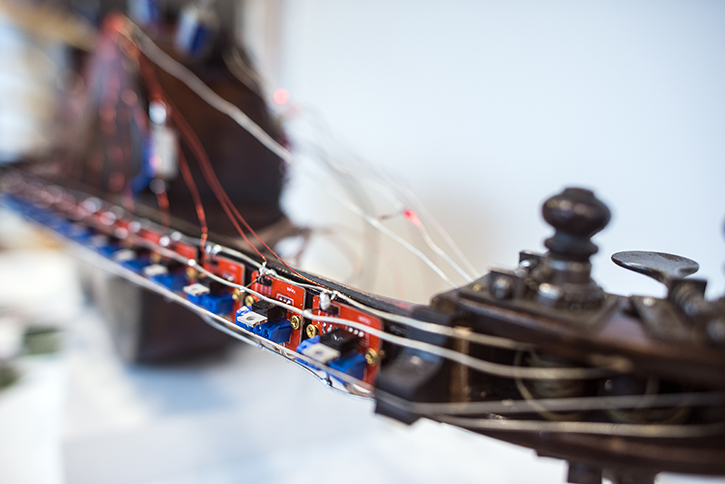 The Narrative Machine exhibit in the Center for the Arts. Photo by Evan Cantwell.