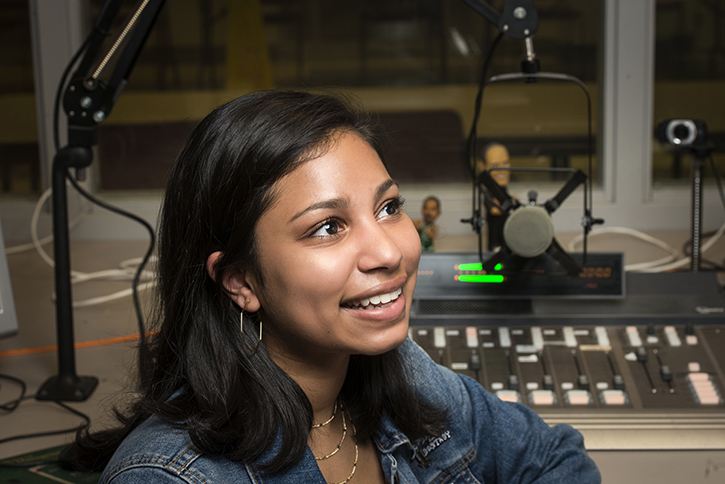 Sasha Toophanie has no desire to enter the radio industry; the rising senior criminology, law and society major at George Mason University would love a position with a government agency focused on homeland security.

But Toophanie loves music and radio, so as a freshman she joined WGMU, George Mason’s student-run station, as an assistant to the music director. Two years later she made some history when she was named WGMU’s first female general manager.

“I’ve been very fortunate during the past two and a half years to have my dedication to the station noticed,” said Toophanie. “It’s even more of a blessing to follow in the footsteps of influential general managers, and now lead as the first general manager.”

“The station is in good hands,” said Jacqueline Reed, Toophanie’s friend and WGMU’s music director. “Her knowledge of the station and encouragement of the deejays is the kind of energy that’ll continue to gratify others and interest others in participating in WGMU.”

As general manager, Toophanie has new responsibilities, such as consulting with faculty advisor Rodger Smith on the station’s direction and management, being in charge of the station’s daily operations and overseeing all executive staff members.

Smith, WGMUs faculty advisor since 1994, said that Toophanie’s leadership will benefit the organization.

“I see Sasha being a catalyst to grow our content and popularity on campus” Smith said. “She’s had the good fortune of being an RA, and demonstrates strong interpersonal skills, along with natural leadership capabilities.”

“The cream rises to the top,” he added, “and the best people are put into positions where they excel.”

Toophanie has excelled at every job she has had at WGMU. By the semester after her first as assistant to the music director, she became the music director. She was promoted to program director in the fall 2017 semester, and became general manager during the spring 2018 semester.

“The transition has brought more laughter than heartache,” Toophanie said. “If anything, I’ve placed pressure on myself to ensure that my leadership will open doors for women involved who may want to be general manager in the coming years.”

Including those who, like herself, don’t want a career in the field. As Toophanie said, her time at WGMU brought her a creative and leadership opportunity outside the obligations of her degree.

“I believe it’s important to be a well-rounded student and not limit yourself to opportunities that are seen as just being for a particular major,” Toophanie said.

“Anyone can lead if they have passion and drive,” she said. “Although I am not seeking a career in the radio and media field, it doesn’t mean that I’m not familiar with the area or have a love for its purpose.”