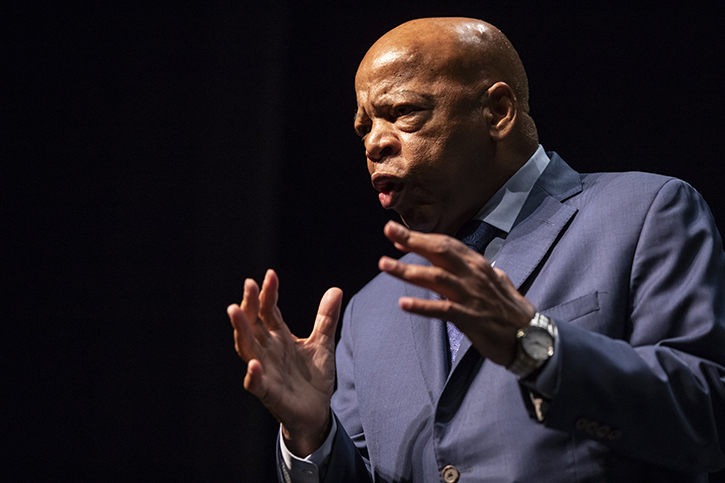 Congressman John Lewis speaks at Fall for the Book about his graphic novel series "March." Photo by Lathan Goumas/Strategic Communications

As part of the Mason Reads common book program, George Mason University freshmen were assigned to read “March: Book One” by U.S. Rep. John Lewis (D-Georgia). On Thursday, Oct. 11, students and the public had the opportunity to hear about the stories depicted in the graphic novel from Lewis himself.

The graphic novel explores Lewis’ story as a prominent civil rights leader who marched beside Martin Luther King Jr. and the Freedom Riders. Lewis and his co-author, Andrew Aydin, took the stage at the Center for the Arts on the Fairfax Campus and shared their experiences and the motivations behind the three-part series. 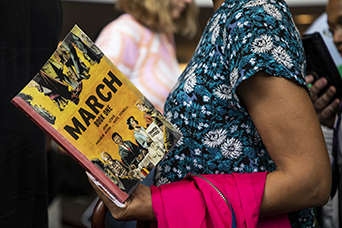 Those who attended John Lewis' talk with his co-author, Andrew Aydin, on Thursday, Oct. 11 at Fall for the Book got their books signed by the authors. Photo by Lathan Goumas/Strategic Communications

"‘March’ is telling a story, not just my story, but the story of people who made up their mind to bring about change,” Lewis said. “It is our hope that ‘March’ will inspire generations yet unborn to make things better.”

Lewis said he was 17 years old when he first wrote a letter to King, and was 23 when he organized the 1963 March on Washington, during which King delivered his “I Have a Dream” speech. Lewis said he hopes the book will inspire younger generations to cause “good trouble.”

“I think sometimes in America these days we're too quiet,” Lewis said. “We need to make a little noise."

He said that during the civil rights movement in the ’60s, the fight wasn’t easy. He was beaten, left unconscious, and arrested—but it was right to do something.

“Believe in the possibility for change, [by] working and pulling together we can create a beloved community,” Lewis said. “We can redeem the soul of America, I believe that.”

Some doubt there can be change, Lewis said, but they should see in him the proof that change is possible through nonviolent protest.

With election day approaching, young people need to send a message to the world, he said.

"I say to you, and especially young people: never give up, never give in, never lose hope,” Lewis said. “Believe that somehow and some way we can overcome."

Aydin, who is also Lewis’ digital director and policy advisor, said the book is necessary for people to know Lewis, the person, and to avoid the trap some fall into when they look at King.

"He's placed on such a pedestal that you lose sight that he was a human being, struggling, facing the same challenges that we all face,” Aydin said. “It makes it impossible to believe that greatness is in all of our grasps."

Mason junior Adanna Newby said hearing Lewis speak in person took away some of the facade.

"It's really cool to see somebody that you're used to reading about in books or seeing in a documentary,” Newby said. “But when you see him in person, the way that he speaks and the way that he is, he seems very relatable." 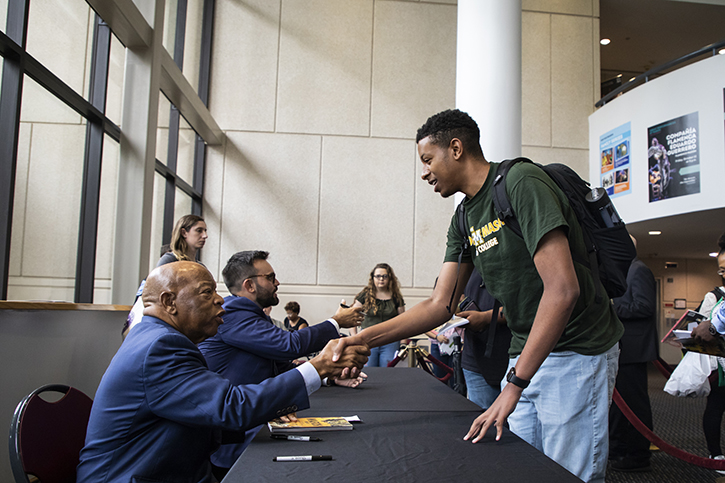 Congressman John Lewis and Andrew Aydin sign autographs after speaking at Fall for the Book about their graphic novel series "March." Photo by Lathan Goumas/Strategic Communications