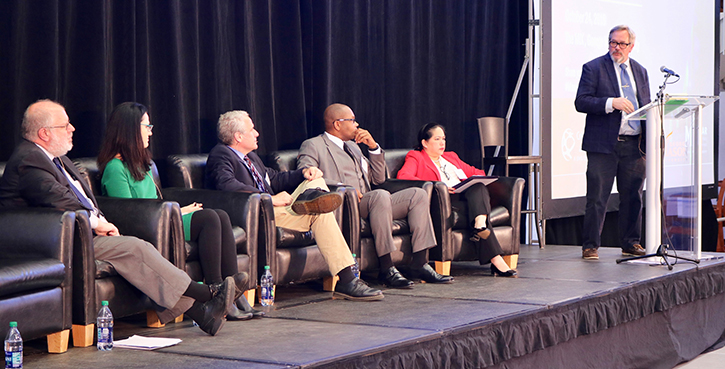 A forum at George Mason University gathered a dozen academic, media and policy experts to discuss the issue of migration and the complexities of forced immigration and gangs, and their relation to homeland security.

The four-hour forum, called “Migration, Homeland Security, and Gangs” drew an audience of more than 100 to the MIX on the Fairfax Campus on Oct. 24. The discussion was sponsored by the Schar School of Policy and Government and the Department of Homeland Security’s Criminal Investigations and Network Analysis Center of Excellence (CINA), a multidisciplinary academic consortium led by Mason professors and administrators.

“As we are pursuing evidence-based approaches to help our government address crucial issues of national security, it is essential for us to better understand the complex processes that drive migration and gang activities,” CINA Director Anthony Stefanidis said. “By bringing together recognized experts from both sides of our borders, this event helped deepen our knowledge regarding these important national security issues.”

“Forced migration from Central America seems to be as much an economic and human problem as it is a security problem,” Correa-Cabrera said. “Sometimes focusing solely on the security aspects of this issue may obscure the root causes of this complex phenomenon. Extreme poverty and violence are at the core of an appropriate explanation.”

Regarding gangs such as MS-13 and how they are portrayed, “we must adopt a holistic and historical perspective to the fully grasp the issue of gang violence both in the U.S. and in Central America,” López-Santana said.

How gang violence and immigration are conflated in the media is also an issue, said Jim Witte, director of Mason’s Institute for Immigration Research, because it tends to frame the narrative and often detract from the efforts to address these issues.

“There is no kind of nuance in this fast-paced media environment,” agreed Ron Nixon of the New York Times.

Participants in the first session, which addressed the causes and challenges of migration around the world, but particularly in Central America, included Nixon; Maria Sacchetti from the Washington Post; Adam Isacson from Washington Office on Latin America; Mark Greenberg of the Migration Policy Institute; and moderator Celina Realuyo of the National Defense University. Witte served as discussant.