Mason junior takes to the skies 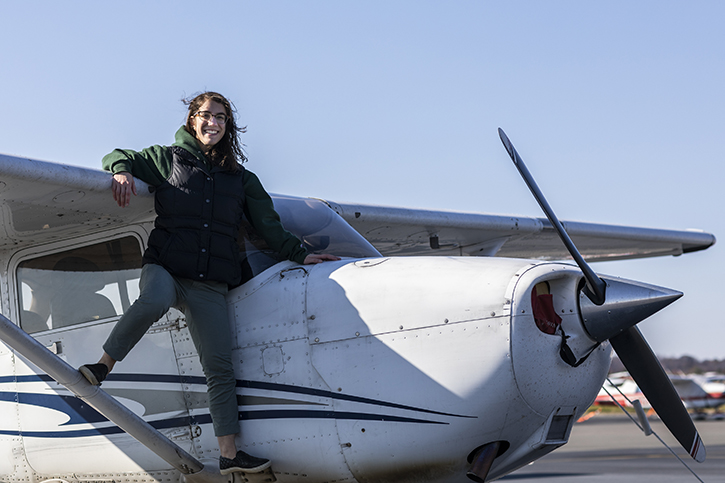 Geography major Amy Rose won a spot in a two-week program that gives young pilots the opportunity to participate in competitions and demonstrations across France. Photo by Lathan Goumas.

It wasn’t enough for George Mason University’s Amy Rose to be proficient or fluent in nine different languages.

The junior Honors College student from Woodbridge, Virginia, hopes to add the designation of accomplished pilot to her resume, and she is well on her way. Rose took a big step toward that endeavor this summer when she was selected to go to France as the lone U.S. representative competing in the Hop! Tour des Jeunes Pilotes. She won a spot in a two-week program that gives young pilots the opportunity to compete in daily aviation competitions and demonstrations all across France.

“It was a dream come true,” she said. “It was really incredible.”

Rose, who began flying in 2017, is fluent in English, Hebrew, Spanish, Portuguese and French and conversant with Italian, Galician, Ladino (Judeo-Spanish) and German.

But flying has proven to be her true passion.

Training at Aviation Adventures in Manassas, Virginia, Rose learned to fly in a Cessna 172, a four-seat, single-engine, high-wing aircraft that is often the plane of choice for beginners. It wasn’t long before the 20-year-old geography major and systems engineering and operations research minor had earned her private pilot’s license through a minor in aviation flight training and management—offered by Mason’s Volgenau School of Engineering— that allowed her to fly solo. She soon followed that up by getting her Instrument Rating and is now working on a commercial pilot’s license.

“I just love flying,” she said. “I like that it’s pretty calming. It’s hardly ever the same. I like the variety. You never feel like it’s your average job out there.”

Rose’s ability to fly and speak the language made her a natural choice for the Hop! Tour des Jeunes Pilots when the call went out for 45 young pilots between the ages of 18 to 24 to compete in the biannual event.

The contest gauged each pilot’s ability to closely adhere to detailed flight plans while flying daily timed segments to various regional and international airports all across France, including one stop at a French military base. Rose flew a Viper SD4, a two-seater with a bubble canopy.

“It was completely different from what I did in my training,” she said.

Steven Rose, her father and a professor in Mason’s Department of Social Work, said his daughter’s experience in France this summer was unlike anything she’d ever done before.

“It was a great education for her,” he said.

Amy Rose hopes to eventually work for NASA or a major airline, but she’s also considering becoming a linguist or an interpreter.

“The intelligence goes without challenge,” said Bob Hepp, the owner and founder of Aviation Adventures. “She’s also got the enthusiasm for [flying]. Put those two together and she can do anything. She’s going to go very far for a number of reasons.”

In the meantime, she continues to follow her passion. When not at the controls herself, Rose is often busy with the Mason Aerospace Engineering Club, which she co-founded, or at the Smithsonian National Air and Space Museum’s Steven F. Udvar-Hazy Center in Chantilly, Virginia, where she works in the Explainers Program and speaks with visitors about flying.

“Flying was something that I realized that I could do,” she said. “The more I looked into it, the more I got hooked into it.”

Amy Rose, who earned her private pilot's license through a minor in aviation flight training and management offered at Mason, shows other Mason students an airplane cockpit at Manassas Regional Airport. Photo by Lathan Goumas.