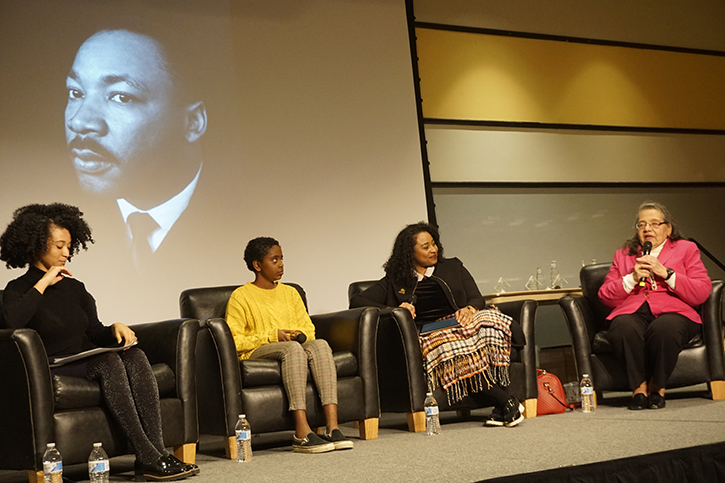 Three pivotal leaders in civil rights and social justice shared their experiences and spoke about the need for continued advocacy before an inspired crowd of Mason students and community members Wednesday.

Civil rights pioneer Diane Nash, 80, joined Trinice McNally, the founding director for the Center for Diversity, Inclusion and Multicultural Affairs at the University of the District of Columbia, and 12-year-old Naomi Wadler were at the Johnson Center’s Dewberry Hall for the 2019 Evening of Reflection, part of Mason’s Martin Luther King Jr. Commemoration Week.

Nash, who also captivated a group of students with her riveting stories in a meet-and-greet session, is one of the founders of the Southern Christian Leadership Conference and played a prominent role in some of the most consequential campaigns of the Civil Rights Movement, including the Freedom Rides and the Selma Voting Rights Campaign. She was a student at Fisk University in Nashville, Tennessee, when she played a key role in the integration of lunch counters there.

She spoke of the constant peril she and others faced in their nonviolent protests, but was adamant that ending segregation was worth all they endured.

“If you weren’t willing to do what was necessary to end segregation, this wasn’t for you,” Nash said. “Even if it meant putting your life on the line, you had to be willing to do that.”

Prior to coming to UDC, McNally had served as the program manager for HBCU Initiatives for the National Black Justice Coalition (NBJC), the nation’s leading civil rights organization dedicated to the empowerment of black lesbian, gay, bisexual and transgender people. She’s also worked extensively with Black Youth Project 100, a national organization of activists aged 18 to 35 seeking to create freedom and justice for all black people.

Conceding today’s difficult environment, McNally encouraged the audience to remain resolute in their search for justice.

“I think that tough people are made at tough times,” she said. “This is not black people’s first time at the rodeo.”

A sixth grader at Alexandria’s George Mason Elementary School, Wadler drew national acclaim after organizing a student walkout to protest gun violence after the February 2018 shooting at Marjory Stoneman Douglas High School in Parkland, Florida. She delivered a well-received speech at the March for Our Lives rally in 2018 that went viral and later dyed her hair orange to encourage people to vote in favor of gun control in the November 2018 election.

“A lot of black girls don’t have that platform, so I’m really grateful for that and trying to do some good with it,” Wadler said.

Nash said America remains in trying times, but sounded optimistic knowing that young activists like Wadler will be carrying the torch in the future.

“Naomi gives me hope,” she said.

“I’m blown away and humbled by this,” said Michelle Allen, assistant director of Mason’s Office of Diversity, Inclusion and Multicultural Education (ODIME). “What I’m taking away from this is that the need for continued civic engagement still exists. There’s a lot of progress that has been made, but we still have a long way to go.”

That was just the message that junior criminology major and aspiring police officer Kana Elder came away with after hearing Nash in particular speak.

“I want to see more change,” she said.

The evening also included the recognition of the recipients of nine Spirit of King awards for students, student organizations, faculty and staff members.