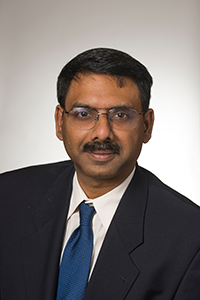 A George Mason University scientist will be among those recognized in April by one of the top universities in Europe with an honorary doctorate for his pioneering work connecting science to societal change.

Vrije Universiteit Brussel will confer Padmanabhan Seshaiyer, associate dean for academic affairs for Mason’s College of Science and a professor of mathematical sciences, with the title of Doctor Honoris Causa, an honor given to an elite cadre of “committed scientists who transcend the boundaries of their own disciplines and to personalities that have been at the frontiers of societal change.”

“Having a societal impact [with] our research is always a good thing,” Seshaiyer said. “If that research can lead to societal change, it really adds a lot of value to what you’re doing.”

In recent years, Seshaiyer has been at the forefront of a multidisciplinary effort that connects science to societal problems in hopes of effecting positive change. For example, research that he and his team conducted on the mosquito-led spread of the Zika virus predicated his research on the spread of gang violence in Puerto Rico.

Seshaiyer saw a pattern similar to Zika’s spread emerging with gangs, with young people already ingrained into that world likewise influencing others to follow suit. Slowing either problem down meant first understanding how it spread, so Seshaiyer has begun consulting with members of the U.S. Congress to find a solution.

Seshaiyer was also instrumental in the development of new categorization of study called STREAMING (science, technology, reading, engineering, arts, mathematics, innovation to inspire the next generation) that combines traditional STEM fields (science, technology, engineering, and mathematics) in a holistic way that includes the necessary reading and writing skills. The practice is being used in an array of countries, including the Bahamas, Suriname, Tanzania, Jamaica, Belize, India and the Philippines.

“We need a multidisciplinary approach to problem-solving,” Seshaiyer said. “If everyone can get that type of thinking, we can solve big challenges.”

Previous recipients of the honor have included the late former president of South Africa Nelson Mandela, noted Swedish diplomat and former head of the International Atomic Energy Agency Hans Blix and famed French explorer and scientist Jacques Cousteau, among others.

This year’s recipients will be formally recognized at a ceremony in Brussels on April 2.

“Those are some very distinguished names, so I feel privileged just to walk on the same stage,” Seshaiyer said. “I’m truly honored by this.”