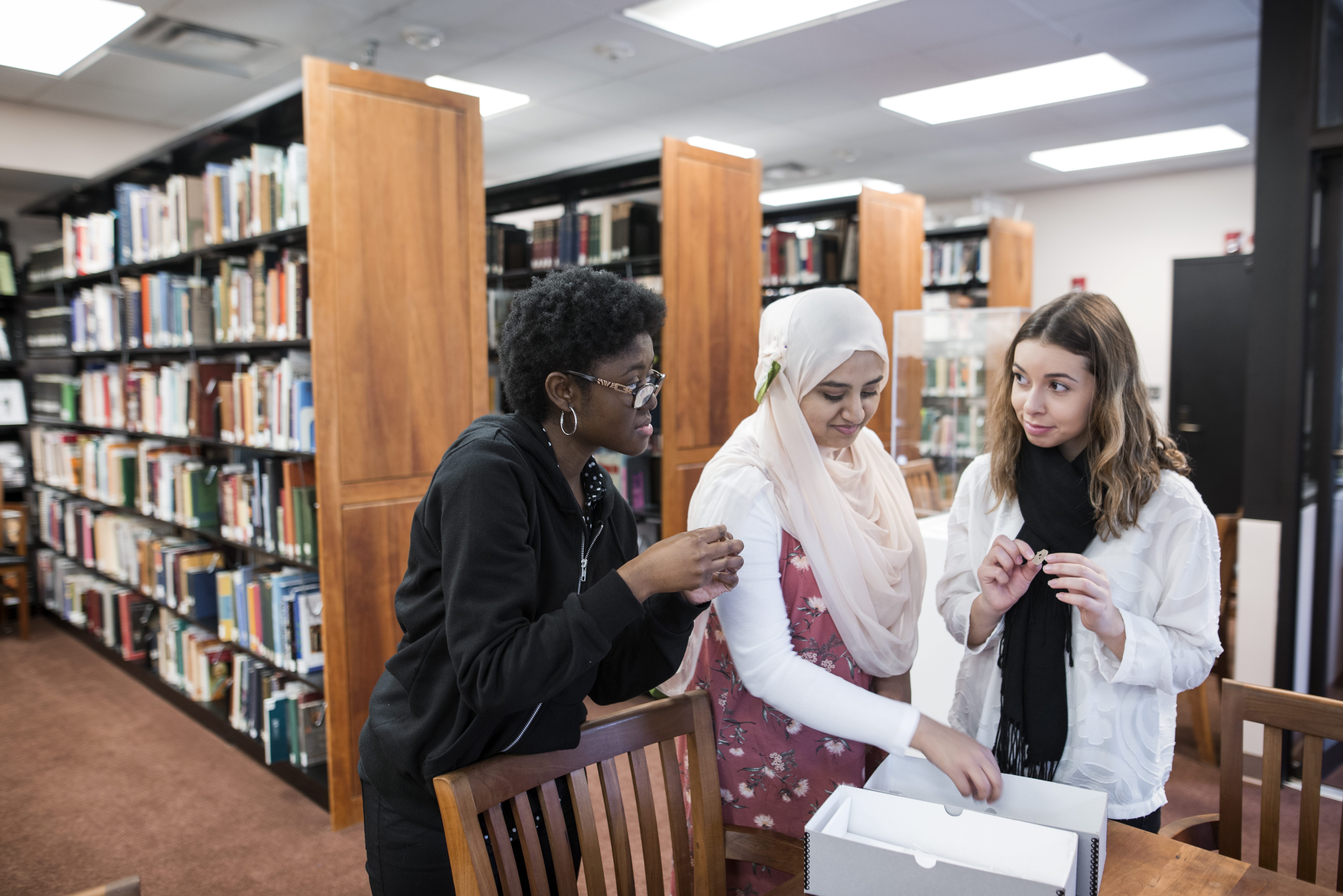 Alexis Bracey (left), Ayman Fatima (center) and Elizabeth Perez-Garcia (right) were three of the students who started with the project in summer 2017, bringing with them their backgrounds in criminology, public health, global affairs and other fields. Photo by Evan Cantwell.

When searching through the George Mason University website for a summer job, Ayman Fatima came across a position that sparked her interest.

The Enslaved Children of George Mason project was looking for a research assistant. The project’s goal was to tell the previously untold stories of those who were enslaved by the university’s namesake, George Mason IV.

“This was something that I wished we had focused on more in class,” said the junior, who is double majoring in systems engineering and government and international politics.  “… The fact that the men who designed American democracy owned other human beings, taking from them their liberty and creating an inherently unequal system.”

The project comes at a time when many universities are examining their histories with enslaved people.

"What we discovered, as faculty and students, is that we still have to wrestle with slavery as an institution even if we were not complicit as an institution in the system of slavery," said Wendi Manuel-Scott, a professor of history and art history at Mason and the former director of the African and African American Studies Program.​

Manuel-Scott and fellow history and art history professor Benedict Carton applied for a grant through Mason’s Office of Student Scholarship, Creative Activities, and Research (OSCAR) to dig into the past. They sought to understand the life of the school’s namesake and those enslaved by him at Gunston Hall, Mason’s historic home located about 20 miles from Mason’s Fairfax Campus.

Those stories have been compiled in an online archive, also called the Enslaved Children of George Mason (ECGM). They also sparked honors and history classes at Mason that integrate the project’s research and the ideas it explored.

Manuel-Scott said she hopes that the students’ work shows other students and the community the power of expanding the historical narrative and the value of adding voices—especially from individuals who are rarely heard—to traditional narratives like those of George Mason and the Founding Fathers. ​

“It is important for our campus community to recognize that our university's namesake enslaved blacks and that his Declaration of Rights did not extend to those he enslaved—because we can only begin to move forward once we have accepted our past,” she said.  “Through the ECGM project, we can start doing that at Mason. I applied [to] and then chose to join the project so that I could be a part of this important work.”​ 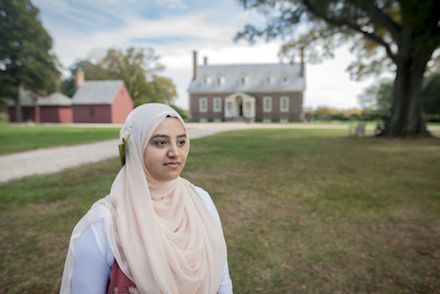 Fatima and four other students started with the project in summer 2017, bringing with them their backgrounds in criminology, public health, global affairs and other fields.

First, the students spent three weeks on intensive reading. Students then developed research areas based on questions they had about the lives of enslaved people and those living at Gunston Hall. George Oberle, history librarian at Mason’s Fenwick Library, helped students with their archival research.

Fatima focused on the life of James, Mason’s manservant.

Much of what Fatima knows about James consists of educated guesses, because historical records often left out enslaved people. According to Fatima, James—who may have also gone by the name of Jammy—did everything for Mason, including carrying him around his home and traveling with him to Williamsburg, Virginia, and Philadelphia.

The narrative Fatima built about James is based on small puzzle pieces, such as wills and letters, or bills of sale that might detail the kind of clothes James wore. Even so, Fatima said it is unclear what happened to James in the end.

Elizabeth Perez-Garcia, a senior majoring in criminology, studied the women in Mason’s life, including his wife and mother, and also found very little documentation about their lives.

Perez-Garcia finally found a court case at the Library of Congress that involved Anne Mason, George Mason’s mother, regarding property questions after Mason’s father died. Finding the document wasn’t easy—Perez-Garcia needed to apply for a special library card to look through the special collections material. She said even the librarians weren’t aware of that document, given that it was rare for women to deal with legal matters at that time.

"It goes to show how there are these little nuggets of information hidden in places like the Library of Congress that are just labeled as 'other' or ‘nonimportant,’” Perez-Garcia said.

All of those stories are on the website, to include the research of Farhaj Murshed, a junior statistics major and Honors College student who delved into the diet and medical treatment of enslaved people at Gunston Hall.

Alexis Bracey, a senior majoring in global affairs and an Honors College member, looked at the enslaved children of Gunston Hall, the Mason family's relationship with the slave trade and the culture of the enslaved community.

The project did not stop at the summer’s end, as the Enslaved Children of George Mason project was the start of a wider exploration of the lives of Mason and those around him. Oberle teaches an honors course and history classes that integrate the project’s findings.

Through this class, they are growing an online journal called Mason’s Legacies with items and exhibits added by students and invited scholars that dive deep into Mason’s history. Oberle said the site will provide students the opportunity to use the Mason family as a lens to explore slavery, westward expansion and other aspects of American history.