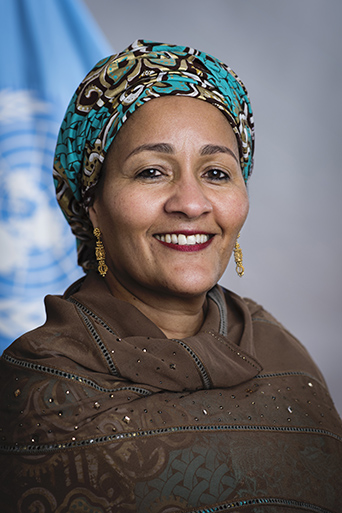 The event will take place at 10 a.m. on May 17 at EagleBank Arena

As a special adviser to former UN Secretary-General Ban Ki-moon on post-2015 development planning, Mohammed assisted in formulating the 2030 Agenda for Sustainable Development, which included the Sustainable Development Goals. The 17 goals are an ambitious international call to action that addresses globally interconnected challenges such as climate change, poverty, inequality and economic growth.

Mohammed called the 2030 agenda “more than a dream. It is a dream with targets and deadlines.”

“We are the first generation to experience the impacts of climate change, and we’re also the last that can prevent a catastrophe for people and the planet,” Mohammed said in 2017. “We also bear the responsibility of having the tools and knowledge to end extreme poverty and hunger and achieve the Sustainable Development Goals. We have no excuse for failure.”

In 2017, the magazine Foreign Policy honored Mohammed with its Diplomat of the Year Award for her leadership and ability to collaborate and coordinate across borders to address global crises.

Mohammed, who was the minister of environment of the Federal Republic of Nigeria from November 2015 to December 2016, held leadership positions under three successive Nigerian presidential administrations. She became UN deputy secretary-general in January 2017.

Mohammed, an advocate for the global education and empowerment of women and girls, is an adjunct professor in development practice at Columbia University.