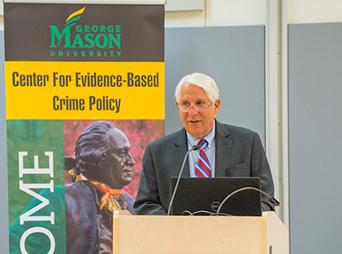 David Weisburd, executive director of the Center for Evidence Based Crime Policy, speaks at the center's 2019 symposium. Photo provided.

Criminal justice practitioners, policy makers and researchers from around the globe gathered at George Mason University’s Arlington Campus with the goal of better integrating science into criminal justice policy.

The 2019 Center for Evidence-Based Crime Policy Symposium on June 27 featured 375 registrants from 190 organizations in 35 states and Canada, and 45 speakers from universities, research think tanks and practices.

The symposium brought them all together to discuss improving the overall fairness and effectiveness of criminal justice institutions and programs.

“The symposium serves as a meeting place for people who are about evidence-based crime policy, and also as a place to share new and cutting-edge research,” said David Weisburd, a Distinguished Professor and the executive director of the Center for Evidence-Base Crime Policy (CEBCP). “Everyone we have been in touch with has noted our success in achieving these goals. We also think that the meeting provides an important venue for showcasing George Mason University and the CEBCP.”

Panel discussions were held on complex issues such as the mental health crisis, identity theft victimization, mass violence in the United States, improving policing through research and analysis and combating the opioid epidemic, among other things.

“This symposium was our biggest meeting yet,” said Cynthia Lum, a professor of Criminology, Law and Society and director of the CEBCP, “and allowed practitioners and researchers to share ideas, collaborate and network with one another.”

This year’s CEBCP Distinguished Achievement Awards in Evidence-Based Crime Policy went to Michael C. Green of the New York State Division of Criminal Justice Services and Lorraine Mazerolle of the University of Queensland in Australia. The award recognizes outstanding achievements and contributions by individuals in academia, practice or the policy arena who are committed to leadership roles in advancing the use of scientific research evidence in decisions about crime and justice policies.

Six members of law enforcement were also inducted into the Evidence-Based Policing Hall of Fame.

“We focus on emphasizing that making policy decisions with strong scientific evidence is critical for the criminal justice system,” Weisburd said. “The mix of researchers, practitioners and policy makers at the symposium provides a wonderful context for pushing this set of ideas. And these are the ideas that led us to build the center in the first place.”