Mason gains ground as one of the largest D.C.-area employers 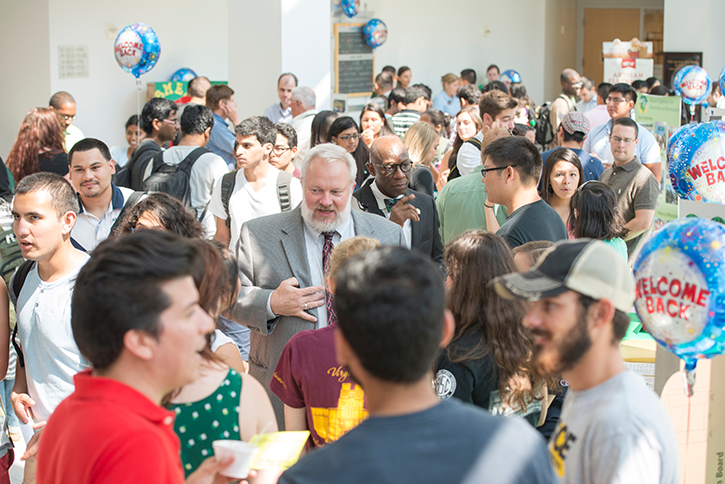 George Mason University was recognized as one of the largest nonfederal employers in the Washington, D.C. area by the Washington Business Journal for 2019.

Mason ranked No. 26, up two spots from last year. According to the report, Mason has 6,889 total employees, with 6,884 from the D.C. metro area. Last year Mason employed 6,769 total workers. The survey looked at the largest 60 nonfederal employers.

“Mason is the second largest university in the region based on employment, climbing in rank from third in 2018 and fourth in 2017, based on the WBJ’s prior Book of Lists,” said Jeannette Chapman, deputy director of Mason’s Stephen S. Fuller Institute for Research on the Washington Region’s Economic Future.

More than 112,000 Mason graduates work in the D.C. Metro area. Many of them are employed by organizations on WBJ’s list, including local schools and universities, defense contractors, Inova Health System (5), Booz Allen Hamilton Inc. (12), Amazon (19), Capital One (23), and many others.

Among Virginia universities, Mason accounted for 64 percent of net public enrollment between 2010 and 2018, producing a significant number of career-ready graduates. The economic impact of the university can also be seen through its initiatives driving research, development and innovation.

Mason works with area employers to design degree programs, provide continuing education opportunities and attract talent and business to the area. Most recently, the university partnered with Amazon Web Services to create a four-year bachelor’s program focused on cloud computing. To support the increased demand for talent in computer-intensive fields, Mason also announced plans to launch its School of Computing in 2019, and the Institute for Digital InnovAtion (IDIA), a multidisciplinary institute that will advance research and the digital innovation economy.

In addition, Mason has been committed to entrepreneurship, assisting in the creation and growth of companies through the Mason Small Business Development Center, which offers advising, training and networking opportunities.