“With a population so large, creating not just a sustainable environment, but a culture of sustainability on campus, can be a huge uphill battle, and it's one we're still fighting to this day,” said Sara Babcock, executive undersecretary for sustainability for Student Government and student in the Honors College.

Babcock outlined some of the efforts the university leadership has already made to position Mason as a sustainable leader in higher education. Examples included President Alan Merten signing the American College and University Presidents’ Climate Commitment and the Mason’s Board of Visitors pledge to design all new construction and major renovation to the Leadership in Energy and Environmental Design, also known as LEED, standard or higher.

Carol Kissal, Mason’s senior vice president for finance and administration and co-chair of the Mason Sustainability Council, reaffirmed the university’s pledge to carbon neutrality that was signed by Merten in 2007 and, on behalf of President Anne Holton, directed the Sustainability Council to develop a Mason Strategic Plan for Sustainability and update the existing Climate Action Plan.

“Universities must play a critical role in the global effort as innovators, as educators, as world citizens,” said Kissal.

Shaelyn Patzer, president of the Communications Graduate Student Association, and the association's sustainability officer Eryn Campbell, both doctoral students, said they decided to rebrand the Mason event as a rally to take a cooperative approach to work with the university on its current climate action plan. 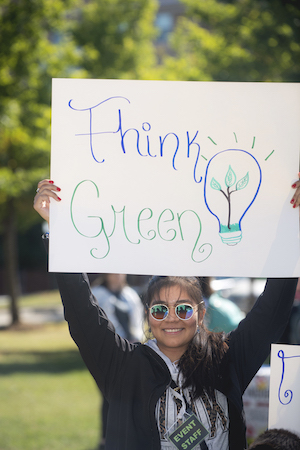 The university’s efforts has received national recognition—in 2014 Mason became the first university in Virginia to achieve a gold star rating in the Sustainability Tracking, Assessment & Rating System, also known as STARS. Mason has also been recognized as one of the nation’s “greenest colleges” by BestColleges.com.

Kissal praised the students’ efforts of engaging in climate activism and participating in sustainable activities and organizations at Mason, as well as the efforts of university thought leaders, faculty like Ed Maibach and Tom Lovejoy who are leading the fight against climate change.

The event also featured a sustainability fair that included tables from the Office of Sustainability, sustainable student organizations and Mason’s Center for Climate Change Communication. Representatives from Student Government, Alpha Kappa Chi, the Office of the President, the Native American and Indigenous Alliance, and RepublicEN.

The event was sponsored by the Communications Graduate Student Association, Alpha Kappa Chi, Mason Environmental Justice Alliance and Green Patriots, with support from the Office of Sustainability and other campus organizations.