Mason’s Green Machine to perform at the World Series 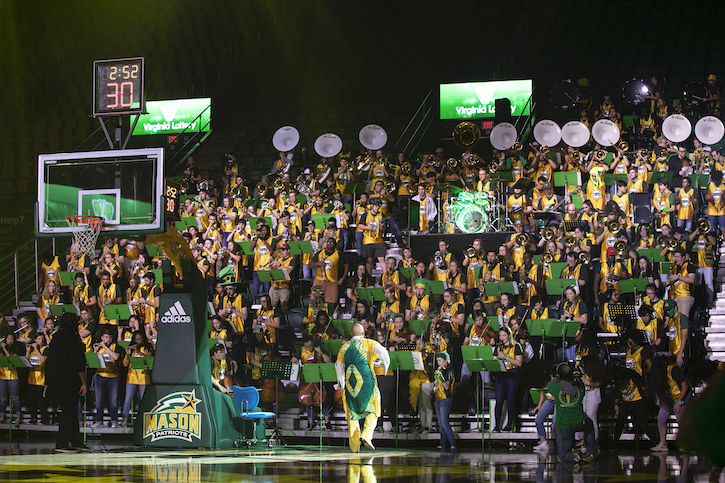 Members of Mason's pep band, the Green Machine, will perform at Nationals Park this weekend. Photo by Ron Aira/Creative Services.

George Mason University will be well represented when the World Series returns to Washington, D.C., this weekend for the first time in nearly 90 years.

Mason’s nationally acclaimed Green Machine ensembles will perform on Sunday evening before Game 5 (if necessary in the best-of-seven series) between the Washington Nationals and Houston Astros. The contests will be the first World Series games in the nation’s capital since 1933.

Sunday evening’s appearance (if there is a Game 5) will include 100 members of the pep band for a performance at the Budweiser Terrace from 5 to 6 p.m. and from 6:15 to 7:15 p.m. The high-traffic location at the main centerfield gate is the stadium’s most-frequented area by fans.

The Green Machine, which was ranked the top pep band in college basketball by NCAA.com in 2015, comprises students from all majors and from the community. The band’s drumline ensemble won an international competition in 2012.

The Green Machine ensembles performs at academic and admissions events, marching competitions, men’s and women’s basketball games, and the Washington Capitals, Wizards and Redskins games. The Green Machine has enjoyed a particularly strong relationship with the Nationals, having previously performed at Nationals Park on opening day and, most recently, during the National League Division Series against the Dodgers.

“This is a great opportunity,” Nickens said. “We have to jump on it while we’ve got it. It’s incredible.”