Mason lauded for its rate of student voting 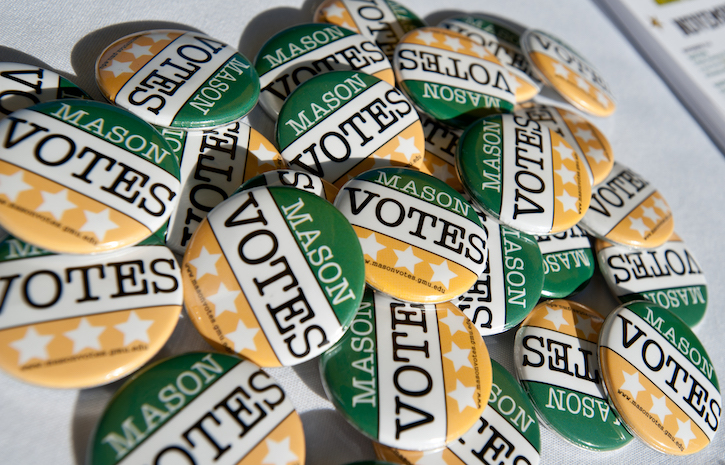 George Mason University was one of 62 institutions nationally that achieved a voting rate of at least 50% among students during the 2018 midterm elections.

The result earned Mason a platinum seal from the All In Campus Democracy Challenge.

“It says our students are active and they care,” said Ben Endres, assistant director of Student Involvement at Mason and a co-director of the university’s Mason Votes initiative. “It shows that Mason students are paying attention and want to make sure their voices are being heard.”

Mason’s 52.4% voting rate was almost 28 points higher than in 2014, according to data from Tufts University’s National Study of Learning, Voting and Engagement.

Mason also beat the national voting rate for all institutions (39.1 percent) and the rate for all public research universities (40.8 percent).

“Being so close to the nation’s capital, politics fall right into our laps,” they said.

But they also emphasized that many campus organizations at Mason, including Student Government, made it a priority in 2018 to emphasize the importance of student voting. Mason Votes amplified that call to action.

Including co-directors Alissa Karton, director of special projects in University Life, and Jason Hartsel, who manages the organization’s website, Mason Votes was a constant presence at campus events. The group handed out buttons, stickers, and T-shirts with the slogan “Your Vote Matters.”

They also worked with student organizations across campus to help their efforts to get out the vote, and Mason Votes livestreamed the recent Democratic debates in the Johnson Center. About 100 to 150 students watched each event, Endres said.

He said he expects student engagement in the 2020 presidential election to be even stronger.

“We’re already seeing a lot of students being active in the conversation in the presidential election,” Endres said. “From the students that I see, they’re already trying to get people active in the political campaigns.”

“With Mason being a place to collaborate and learn from one another, we also grow together, not only in our academic environment but the world around us, including the political realm,” Layton and McLaughlin said in their joint statement.