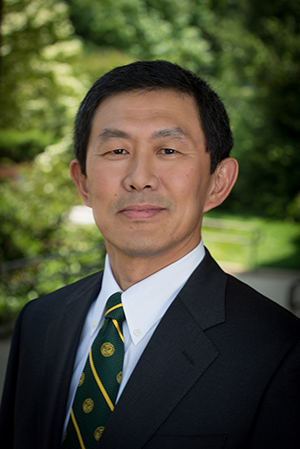 “I am deeply honored, and absolutely thrilled and humbled, to be the next president of Baruch College,” Wu said. “My time at Mason has been one of tremendous growth and learning, and provided me with the opportunity to work with colleagues who shared the vision of creating the best quality education for our students and a powerhouse for new ideas and new paradigms for research and learning that change the world.

“Over the last six years, I have been fortunate to work with a tremendously talented team and help the university to achieve a whole new level of national recognition and prominence. Everything I have learned at Mason has prepared me for this next step in my journey and for that, I am immensely grateful.”

“I want to personally thank David for his hard work and commitment to Mason,” said Interim President Anne Holton. “He has been an extraordinary partner over the past six months, providing leadership and support during this transition. I am grateful for all he has done for the university. I also want to congratulate him on this opportunity, which is a great move for him both professionally and personally.”

Wu was instrumental in helping to shape Mason’s vision for offering Access to Excellence. Since joining the university in 2014, he has played a leading role in the university’s emergence as a top-tier research institution, and he has spearheaded the university’s strategic priorities. During his tenure, Mason experienced the fastest enrollment growth in Virginia, increased student diversity and academic outcomes, and became the youngest institution to receive Carnegie tier-one research designation.

One of Wu’s signature achievements was to elevate multidisciplinary academic and research collaboration at Mason, which led to the creation of the Mason Impact initiative to enrich student learning, and the creation of multidisciplinary research institutes in BioHealth Innovation, Sustainable Earth, and Transnational Crime. During his tenure, the sponsored awards for research, scholarship and creative work increased by nearly 80 percent. During the past two years, Mason jumped 90 places in the Wall Street Journal/Times Higher Ed ranking based on “educational impact and the lifetime benefit to students.”

Wu will remain at George Mason University through the spring, and Holton will name an interim provost with input from Mason deans, faculty and other university leaders. A search for Mason’s next provost will begin and will be ultimately be led by Mason’s next president.

Baruch College—which maintains a rich tradition of academic excellence, accessibility, and diversity—is among the most selective public institutions in the United States and serves as a national model for driving student success. The Chronicle of Higher Education ranked the Manhattan-based college No. 1 for social mobility among four-year public universities. “As an immigrant, this speaks to me personally, and I am excited to play a part in shaping the next chapter of Baruch’s legacy,” Wu said.

Wu and his wife Sheau-Ping will join their two adult children who both live and work in New York City.