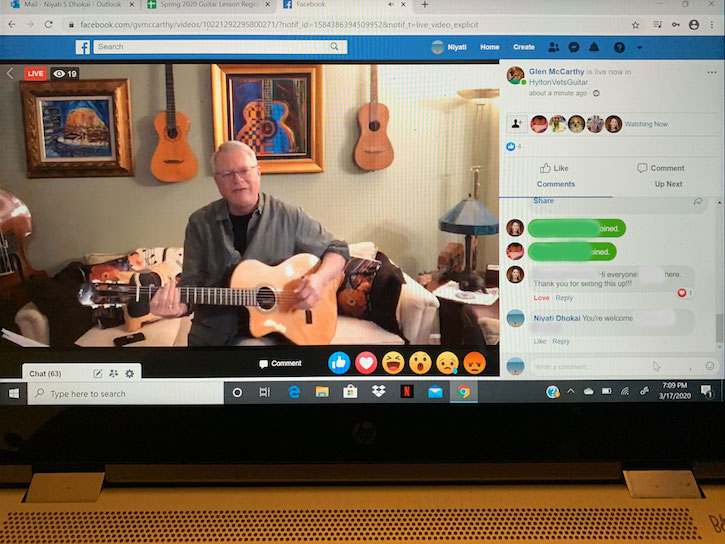 Glen McCarthy of Mason’s School of Music has been using Facebook Live to teach his online guitar and ukulele classes. Photo provided.

Donald Goff, 72, was looking to improve his ukulele skills. So, over the summer, he attended a workshop for veterans and their families to learn more about the instrument.

“It’s a fun class,” said Goff, a veteran who lives in Aldie, Virginia. “I tell people to just throw yourself in and come. You’ll be with other people who have never before played a stringed instrument, and by the end, you’ll be able to learn hundreds of songs.”

The program is being held again this spring. Initially planned to be held at the Hylton Performing Arts Center on George Mason University’s Science and Technology Campus, the class was forced online due to the coronavirus pandemic and the need for social distancing.

While Goff prefers the in-person class, he said the online version was still a “real bright spot” in his day.

“Truly, it is challenging to spend nearly all our time sheltered in place,” said Goff, who has also been learning to play guitar. “Having an outlet like the online ukulele learning is a real boost to my ego and brain.”

The program, which runs for four consecutive Wednesday evenings, is part of the Spring 2020 Veterans and the Arts Initiative and Creative Forces: NEA Military Healing Arts Network, an initiative of the National Endowment for the Arts in partnership with the U.S. Department of Defense, Veterans Affairs and state and local arts agencies. It is free to veterans, servicemembers and their families, and military caregivers. The instructor is Glen McCarthy of Mason’s School of Music, who has previously taught both the ukulele and the guitar to veterans.

McCarthy admits to being a novice at online teaching, and said there has been a learning curve for him. He’s been using Facebook Live, and said there are more than 30 people in the closed group.

Niyati Dhokai, program director for the Veterans and the Arts Initiative, says the ukulele class offers an opportunity for veterans of all generations and their families to “come into a communal space and build collaborative trust by having a shared experience.”

Separately from the Creative Forces project, Jatin Ambegaonkar, a professor in Mason’s College of Education and Human Development, and Dhokai received $94,000 for an Art Works: Research Grant from the National Endowment for Arts to support a study examining the effects of arts engagement programs on the health outcomes of older adults.  In this prior collaboration, participants also engaged in ukulele workshops, and Ambegaonkar and Dhokai noted the positive effects participation on health and well-being.

Initially, the Veterans and the Arts Initiative focused on guitar lessons. Dhokai, a research assistant professor in the College of Visual and Performing Arts, came up with the idea of offering intergenerational guitar classes for veterans and their families in a community setting after spending most of her career working with service members recovering from injuries.

More recently, Dhokai and Ambegaonkar noticed ukuleles were “very popular with military families.” The ukulele has a long history, dating back to the 1800s. It first appeared in Hawaii as an adaption of the Portuguese machete de braga, a small guitar-like instrument introduced by Portuguese immigrants.

“In some school systems, the ukulele is the new recorder, a portable instrument that children can learn on,” Dhokai said. “Because it has less strings than the guitar and its smaller than the guitar, it’s a little more accessible for both younger and older people.”