Alan G. Merten, who as George Mason University’s fifth president set out to turn a budding research university from “good to great” with a distinct regional footprint and international scope, died Thursday in Florida after a battle with Parkinson’s disease. He was 78.

Merten arrived on campus in 1996 with a goal to make deeper inroads in the community, streamline the university’s innovative pursuits, and raise the quality and stature of an institution that was not yet 25 years old. He believed Mason had the potential to serve as an academic and cultural hub in the Washington, D.C., region like other metropolitan area universities.

He was onto something. In 2008, as recounted in a Mason history, U.S. News & World Report designated Mason as the “Number One University to Watch” and put it on its first list of “Up-and-Coming Universities”—schools “that have recently made the most promising and innovative changes in academics, faculty, students, campus or facilities.”

Merten called this recognition “a major reaffirmation of what we believed we were.” His vision was now coming into focus for observers around the country.

“The impact of Alan Merten is felt on our campuses every day,” Mason Interim President Anne Holton said. “His sharp and prudent leadership at a pivotal time in a young university’s history guided Mason on a path to prominence. So much of what we value about Mason today is a direct result of his vision.”

“Alan was a mentor, colleague and friend,” said Mason Interim Provost Mark Ginsberg, hired by Merten as dean of the College of Education and Human Development in 2010. “His leadership of our university positioned us to become what we are today—and I am so very grateful for his many contributions. A great leader and even better person, he led with grace, dignity and always respecting and engaging students, faculty and staff.”

During Merten’s 16-year tenure, the university opened more than 20 major buildings on the university’s three campuses, including the Art and Design and Nguyen Engineering buildings in Fairfax, the Biomedical Research Laboratory and Hylton Performing Arts Center in Prince William, and Founders Hall in Arlington, part of his goal to give each campus equal status as vital components of the greater institution. He also started student-focused entities, including University Life.

Merten inherited a university that he said exhibited “both the excitement and downsides of youth.” He sought to streamline the university’s entrepreneurial capabilities and ambitions and expand its research. Merten merged some competing or overlapping programs to maximize intellectual and physical resources, tweaking what he called a “let every flower bloom” mentality. He extended Mason’s reach with the Northern Virginia business, technology and arts communities to raise the university’s visibility locally, a fundamental step toward greater prominence.

"Alan Merten will be remembered for taking George Mason University to the next level,” said Til Hazel, a Northern Virginia real estate developer and former Mason rector. “He was a leader who understood what it takes to make a great university extraordinary and he will be missed.”

Merten served on various business and government councils and committees, including chair of the National Research Council’s Committee on Workforce Needs in Information Technology and as a member of the Virginia Governor’s Blue Ribbon Commission on Higher Education. He also served on the Northern Virginia Technology Council, the Northern Virginia Roundtable, the Potomac KnowledgeWay, the Inova Health System Board of Trustees, the Federal City Council, the Greater Washington Board of Trade and the 123 Club. His wife, Sally, was actively engaged with the community, including public television station WETA and the Women’s Military Memorial.

“Alan understood that the deeper relationships he could establish in the Northern Virginia community, the quicker this university could blossom on the state, regional, national and, eventually, international level,” said Mason Rector Tom Davis, the former Fairfax County Board of Supervisors chair who was serving in the U.S. House of Representatives when Merten arrived at Mason. “His vision and prudent decision making have much to do with where we are today as an institution.”

A greater global focus also took root under Merten, who disbanded the Institute of International Education because, as he said in a Mason oral history, “I wanted everyone to be international.” He also said, “I tell students, when you walk into a classroom, sit down by someone who doesn’t look like you; they could be from one of 120 to 140 different countries.”

One major international event Mason attracted was the 1998 World Congress on Information Technology, previously hosted by such cities as London, Paris, Tokyo, Copenhagen and Barcelona. Faculty member Vernon Smith winning the Nobel Prize in Economics in 2002 also brought international attention to the university. 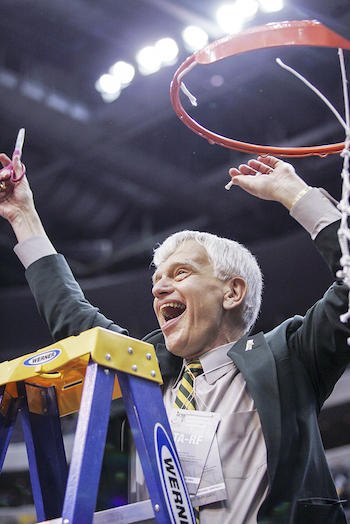 But there would be another event that, much to Merten’s delight, highlighted Mason to the world—the men’s basketball team’s dramatic, and unlikely, run to the 2006 Final Four. Merten forged a close relationship with the coach, Jim Larranaga, and was the team’s top supporter through what is still cited as the quintessential “Cinderella” story of the NCAA tournament.

“President Merten was not only a great person but a great leader,” said Larranaga, now men’s basketball coach at the University of Miami. “Some of my greatest memories are when I spent time with my wife, Liz, Dr. Merten, and Sally.  He was my best friend and biggest supporter during our 14 years together at George Mason. His accomplishments were incredible. He was one of a kind. Liz and I will miss him dearly, and we will keep Sally and the Merten family in our prayers, always.”

The NCAA run raised Mason’s profile. According to the Mason history, the university experienced tremendous growth during Merten’s tenure, swelling from about 23,000 in 1996 to about 32,500 in 2010, two years before his retirement. The out-of-state and on-campus enrollments also grew significantly. Sometimes, Merten would have to defend his statistics.

“[People] around the nation and around the world are stunned when I tell them we’re only 37 years old because of our size, quality and reputation,” Merten said in 2010. “Some people tell me I’m lying!”

Alan Gilbert Merten was born in Milwaukee, Wisconsin, on Dec. 27, 1941. He attended the Universities of Wisconsin at Milwaukee and Madison. After graduating, he joined the Air Force and soon earned his master’s degree in computer science from Stanford. He worked in the Pentagon for three years and then returned to UW-Madison to earn his doctorate in computer science.

Merten taught in the engineering and business schools at the University of Michigan, rising to associate dean for executive education and computing services. He served as the dean of the College of Business Administration at the University of Florida from 1986 to 1989 and for seven years as dean of the graduate school of management at Cornell before coming to Mason.

The Mertens endowed four scholarships at Mason. The former University Hall, on the north end of the Fairfax Campus, was dedicated as Alan and Sally Merten Hall in 2014.