Erblin Nushi and Kaidan Blackmer, both of whom graduated from George Mason University in 2018, credit their confidence in telling their LGBTQ stories through film to the supportive atmosphere within the film and video studies community. Their advice for students who have come out or who are considering coming out is to be themselves and find safe communities like they did at Mason.

“My experience at Mason and with the Film and Video Studies [Program] students was great. We were encouraged to tell our stories, and we knew we were in safe hands to do that,” Nushi said. “It was a very open-minded community and one that keeps in touch.”

While at Mason, Nushi created several films with queer characters, including one film about sexual assault and another about family dynamics.

Since graduating, Nushi wrote and is now directing a feature length film about a gay teen who has fallen in love with someone he met online. The film, titled “I Love You More,” is loosely based on Nushi’s first experience being in love. While filming is on hold due to the coronavirus pandemic, Nushi hopes it will eventually help teenagers throughout the world.

“I like to tell stories that matter and make a difference,” Nushi said. 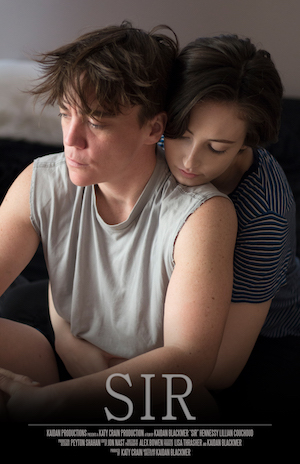 Blackmer came out as transgender during his junior year at Mason. He said the film and video studies community was encouraging and supportive. During that time, he wrote a fictional film loosely based on his own transition from female to male. The short film, “Sir,” tells the story from the viewpoint of the main character trying to use a bathroom at a gym.

“The character, who identifies as male, is met with resistance in both the male and female bathrooms,” Blackmer said. “I wanted to tell the story of how society treats trans folks in public spaces. I wanted people to watch it and understand gender from my point of view.”

Blackmer said creating the film helped him understand and accept himself.

“’Sir’ was there to help me process my journey,” Blackmer said. “The film professors encouraged me to dive deep into my gender and tell my story. That’s where art really flourishes, when you can draw on your own life.”

Blackmer’s advice to students who are considering or in the process of gender transition is to “take it one step at a time.”

“If it’s safe for you to come out and it’s what you want to do, do it, but only on your own terms,” said Blackmer. “And make sure you find your own safety net of people to help you.”