Zombie crab research and their effects on the Chesapeake Bay

It’s the stuff of nightmares and horror movies: Tiny estuarine mud crabs become infected with an invasive parasite that takes over their bodies and brains. But it isn’t fiction, and Mason’s team of researchers is learning more about these invaders and how they impact the ecology of our region. 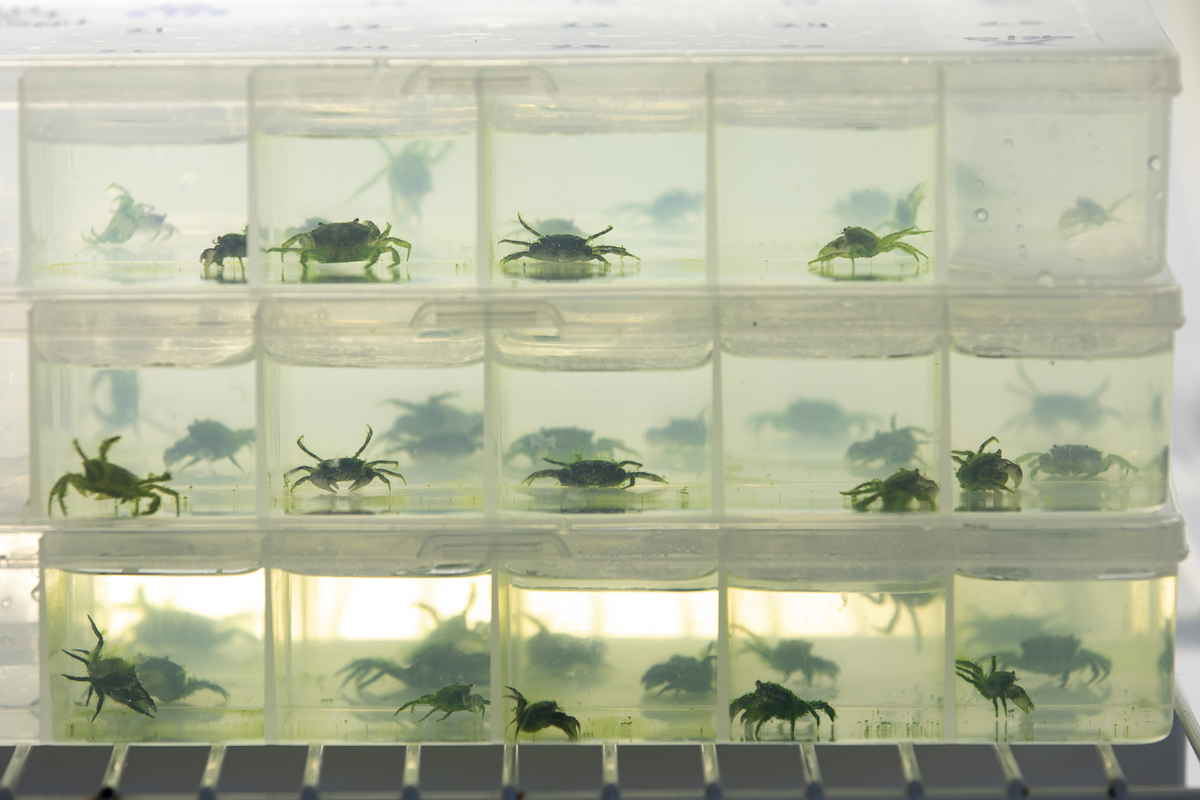 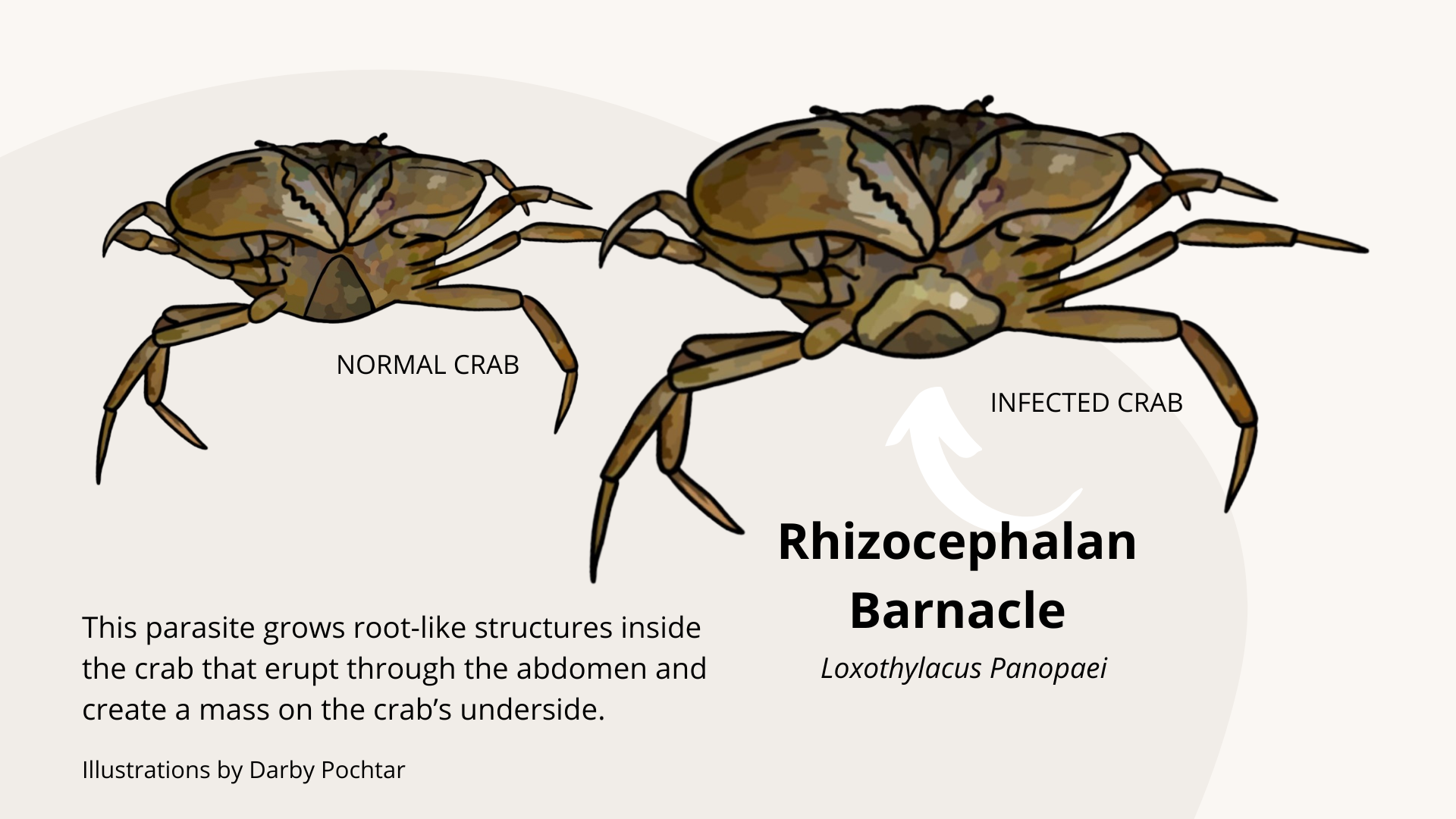 One parasite, a rhizocephalan barnacle (Loxothylacus panopaei), grows root-like structures inside the crabs, eventually castrating them. It even erupts through the abdomen of the crab, just like in the movie Alien, creating a mass on the crab’s underside that is pure parasite.

“We call it a zombie crab at this point because they are essentially no longer part of the crab population,” says Pochtar, who is working on a PhD in environmental science and public policy. “They are only producing more parasites.”

It’s is good at what it does, says Fowler. The infected zombie crabs serve as vessels for the barnacle's reproduction, providing the parasite with a mobile host. 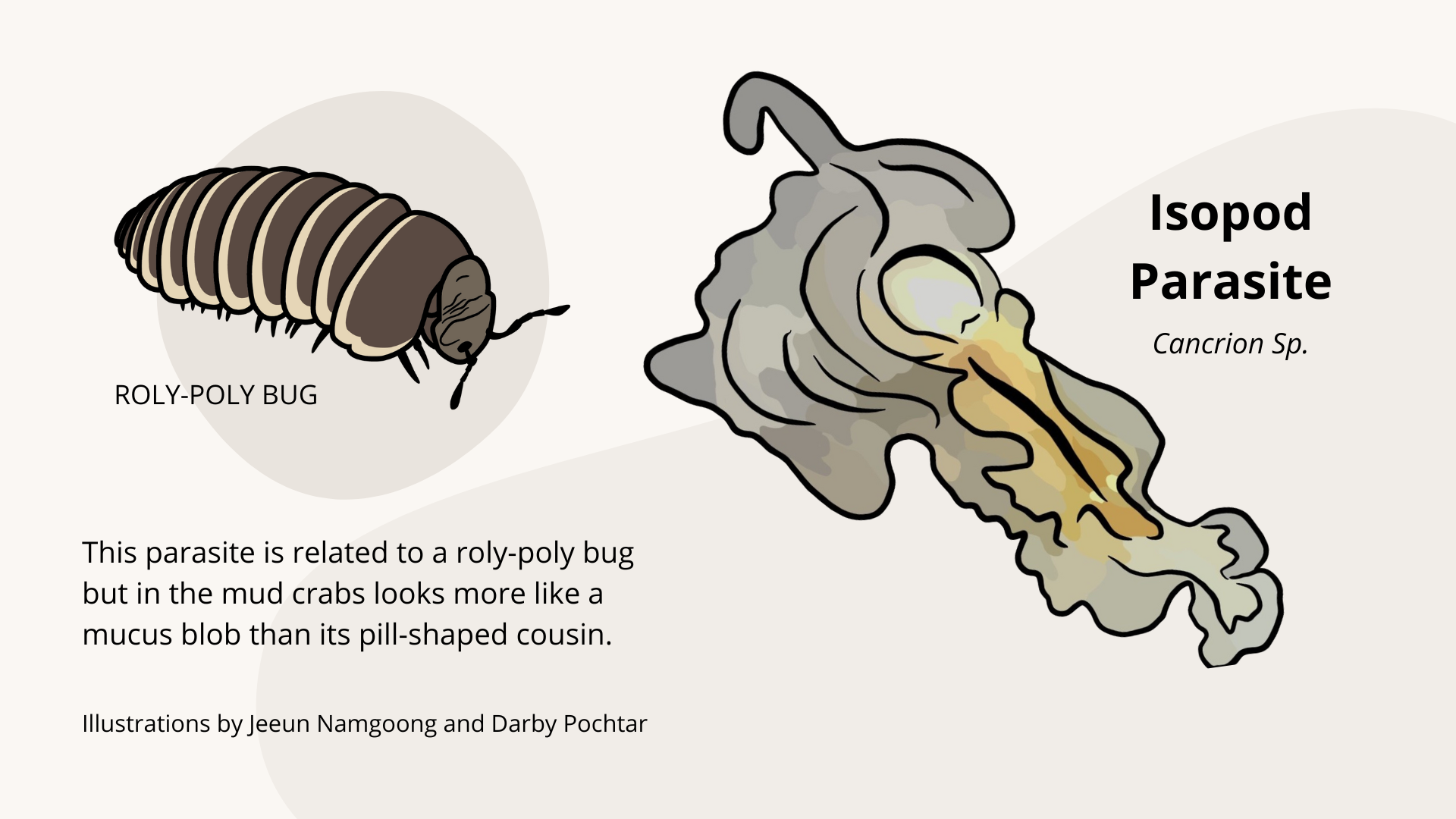 The second parasite that Fowler’s team is investigating is an isopod parasite (Cancrion sp.), related to a roly-poly, or pill bug. However, Greenberg and Pochtar have found that, in the mud crabs, this parasite no longer resembles their terrestrial cousin but instead looks more like a mucus blob.

“There's not a lot of literature on isopod parasites,” says Greenberg, who is working on an MS in environmental science and public policy. “They haven’t been documented in this host in the Chesapeake Bay, so a lot of the work that Darby and I are doing is trying to figure out what this parasite is. We think that it is also a castrator.”

The team says that the crabs can host both parasites at the same time, and those infected with the isopod can be infected by more than one. In fact, Greenberg and Pochtar have found as many as five female isopod parasites in one tiny mud crab.

Parasite invaders and the impact on local waters

“Part of our work is investigating the invasion of the barnacle parasite from its native range in the Gulf of Mexico to the Chesapeake Bay and how that negatively impacted crab populations," says Fowler, who teaches in the Department of Environmental Science and Policy in Mason’s College of Science.

“I think the big story here is invasions—the movement of organisms from one place to another, and what happens next."

The mud crabs are native along the eastern United States from Canada to Florida and the Gulf of Mexico. The parasitic barnacle is native to the Gulf of Mexico and the Florida panhandle and started showing up in the Chesapeake Bay in the 1960s. Fowler says that genetic tests confirm that it is the same barnacle.

A popular hypothesis pins the origins of this invasion on the oyster industry. Live oysters were brought to the Chesapeake Bay from the Gulf of Mexico, Fowler says. Parasitized mud crabs, and probably other organisms, were able to “hitchhike,” a term used in the field to describe how invasive species could travel from place to place, in or on the oysters and to the bay. 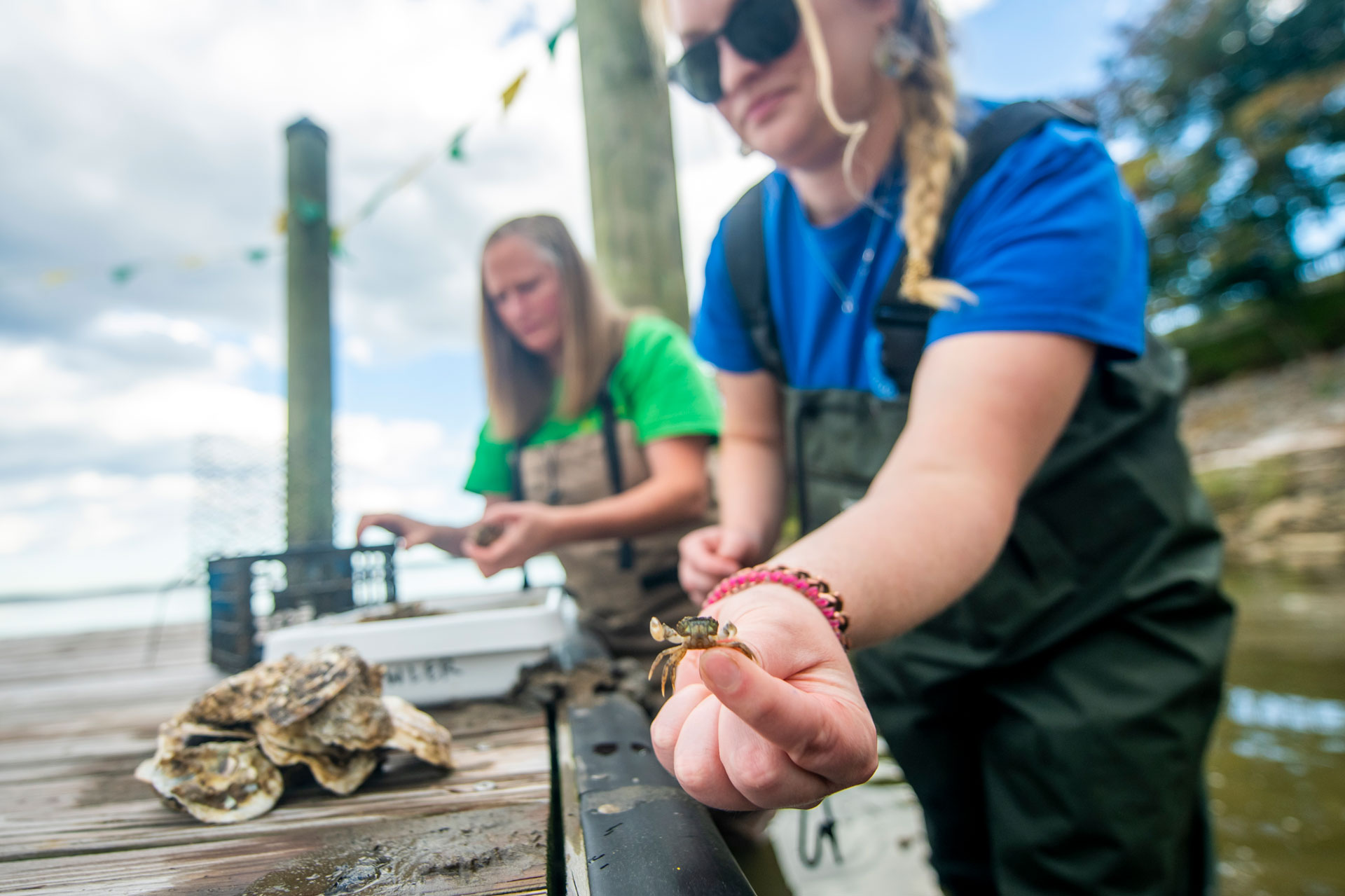 And these mud crabs love oysters, living around and on their shells. “When the Chesapeake Bay oyster fishery collapsed, they started importing oysters to rebuild it,” says Fowler, who is also a research associate with the Smithsonian Environmental Research Center in Edgewater, Maryland. “So there were probably hitchhikers in those oysters when they put them in the bay, and some of those mud crabs were probably parasitized. It spread to the crabs in the bay because they are the same species.”

Unlike other types of parasites that need two or more hosts to complete their life cycle, the parasitic barnacle studied here requires only the crab host, which helped enable the successful introduction. And invasions are nearly impossible to control. 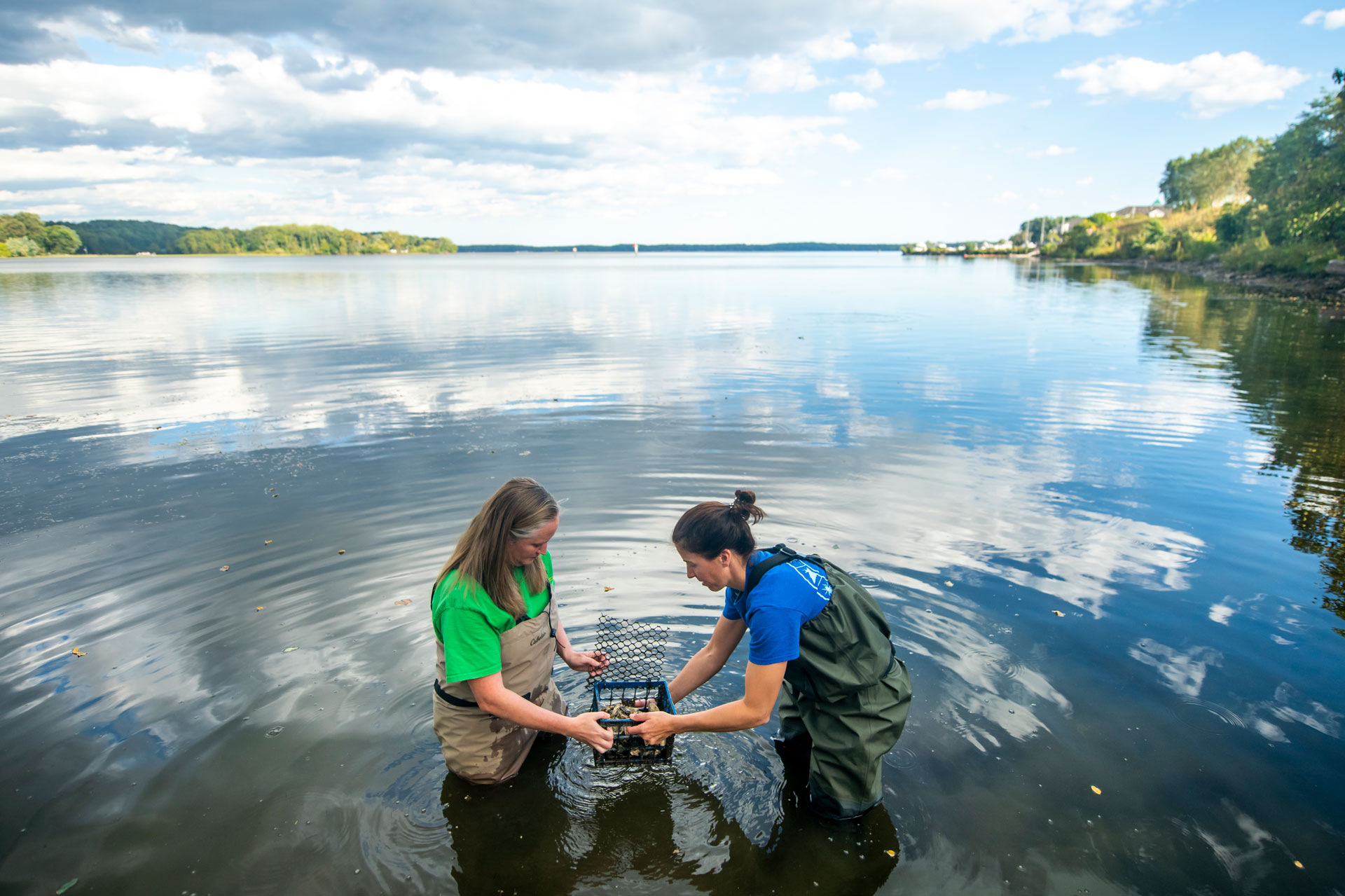 These parasites travel in water as nearly microscopic larvae, looking for a host. During the early part of the invasion, the parasite took advantage of naïve crabs and were very successful, parasitizing up to 90 percent of some crab populations in the bay, according to Fowler.

While people don’t eat the small mud crabs, Fowler and other researchers are thinking ahead to how parasites can wreak havoc on the food chain and potentially to commercial fisheries. The implications would truly be a nightmare, especially for the Chesapeake Bay.

A sister species to the barnacle parasite Fowler studies infects and castrates blue crabs in the Gulf of Mexico. If that parasite were to successfully invade the Chesapeake Bay, “the implications for the blue crab fishery are astronomical, because [the population] has already been depleted,” says Fowler.

"We try to think of this invasion as a model— if that were to happen [to a species like the blue crab], what could happen?” 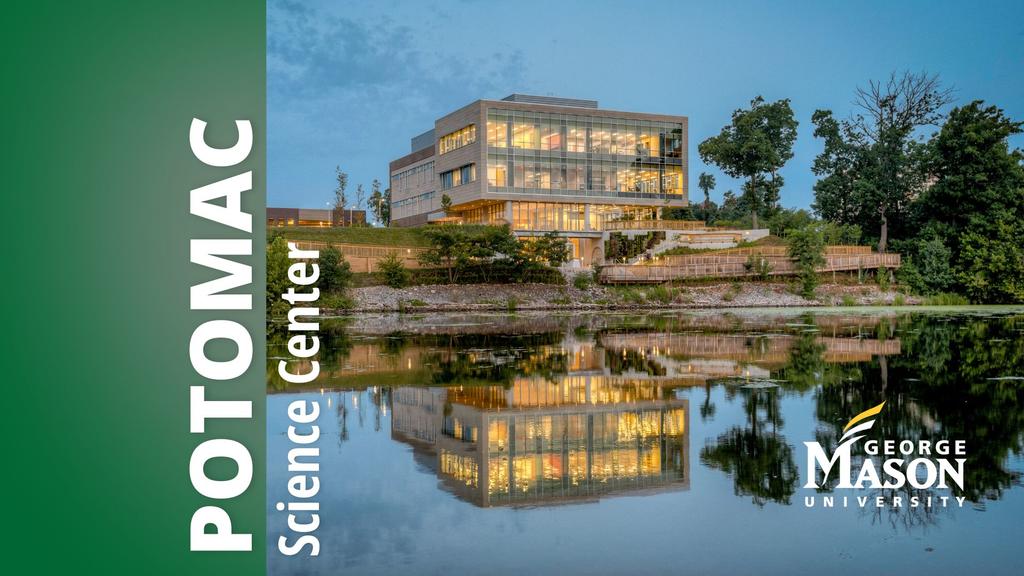 Learn More About the Center

The Potomac Science Center is a destination for environmental science research along the Chesapeake Bay watershed.