Recent George Mason University alum Alexander Hammett returned to campus last fall, along with a few other alumni, to participate in the annual “Best of Mason” film showcase and talk to those students just starting in the Film and Video Studies Program.

Hammett, who graduated from the program in May 2021, had advice for incoming and current students, but he also served as a shining example of a successful graduate. Hammett recently received Miami Indie Films’ Best Director Award for directing “Tale of Tarot,” a film written by fellow Mason alum Aaliyah-Janay Williams, BA Film and Video Studies ’21. At the same festival, the film also won for best lead female actress, played by Shalom Omo-Osagie.

The film, set at the turn of the 19th century, explores relationships through the eyes of two sisters who are trying to find a comfortable life. The plot includes a love triangle, but Hammett said the film’s biggest takeaway is to have faith in your loved ones. The film is available on Amazon Prime; its official trailer can be viewed on You Tube.

Hammett said he wanted to enter “Tale of Tarot,” filmed in May and June 2021, into as many festivals as possible. “It was great to know that the Miami Indie Film Festival was one of the few that were still open for submissions at the time.”

“It was honestly a great surprise,” Hammett said of the award. “This is the first piece I’ve directed that wasn’t at Mason, and to see how putting in the effort and time can really pay off was rewarding.” 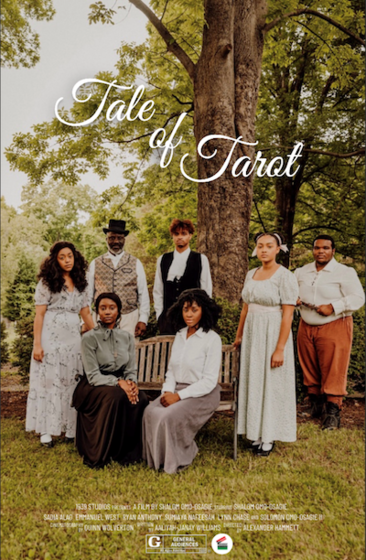 While winning the award might been a surprise to Hammett, Mason professor Nikyatu Jusu wasn't surprised by the news.

“I recall Alexander to be a curious, self-motivated, highly collaborative and charismatic student,” said Jusu, who is assistant professor of directing and screenwriting at Mason. “His directing award for his most recent work comes as no surprise based on his presence in my course. Excited for his bright journey ahead.”

At the Best of Mason, he and other speakers explained the process of making films during the pandemic and recapped their time at Mason and what they learned. Hammett said Mason's College of Visual and Performing Arts was instrumental in helping students believe in themselves.

The audience also had the opportunity to view "Stuck," Hammett's senior thesis film—"a film I made during the time we all had to stay home because of COVID,” he said.

Hammett’s creativity extends beyond the director’s chair. He recently wrote the script and starred as a lead actor in a horror film, “Dantae’s Inferno,” directed by Shalom Omo-Osagie of 1939 Studios and released in November 2021. He is also working on a web series called "Command" that is in post-production.

“My message to students is that you should take the opportunities, take the chances, be on sets, be everywhere," said the rising filmmaker/screenwriter/actor. "Because just being there is getting every step closer to where you want to be.”