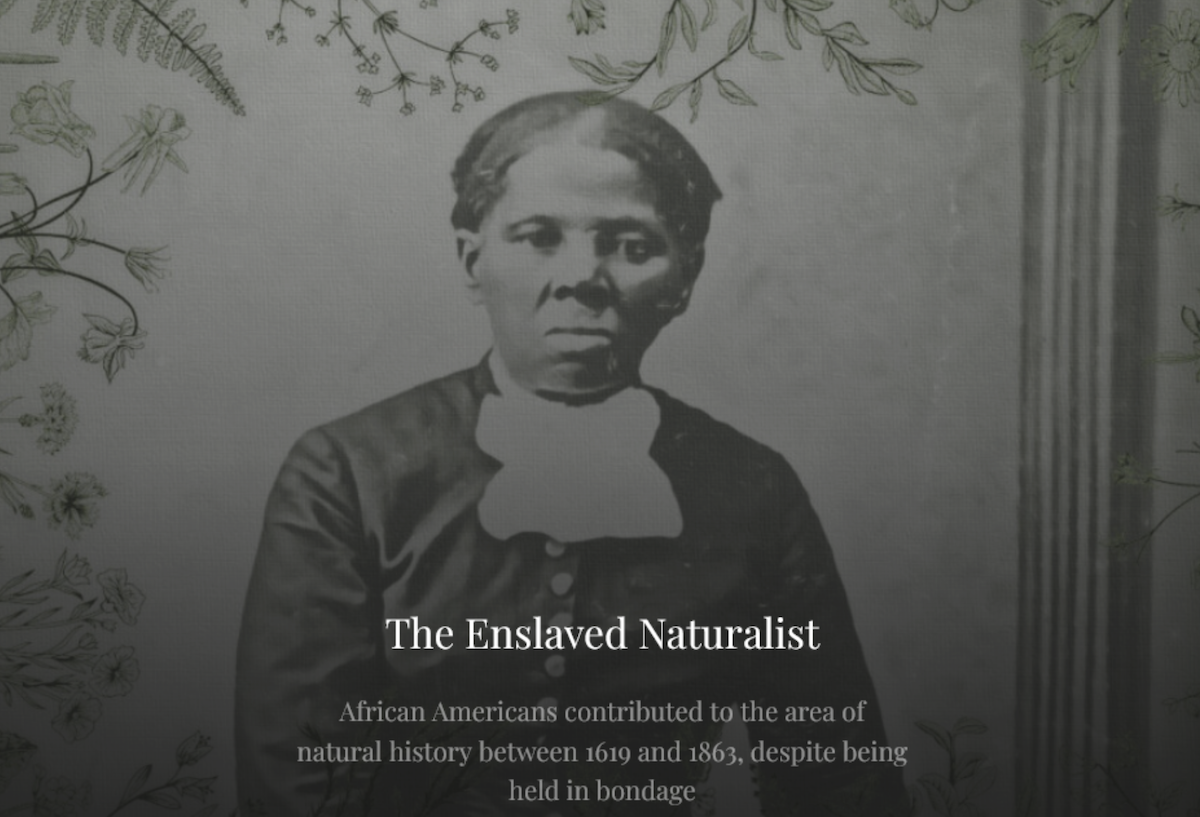 George Mason University scholars from the John Mitchell, Jr. Program for History, Justice, and Race at the Jimmy and Rosalynn Carter School for Peace and Conflict Resolution and the Department of Environmental Science and Policy (ESP) of the College of Science have teamed up to create an online exhibit highlighting and acknowledging the hidden history of enslaved naturalists.

Between 1619 and 1863, enslaved and free African Americans contributed significantly to the current understanding of natural history, particularly in the United States. But their stories are not included in American classrooms, textbooks, or discussions. Men like Henry David Thoreau, John Muir, Carl Linnaeus, and Aldo Leopold have places in the accepted narratives—but folks like Harriet Tubman, Jenny Dugan, Brister Freeman, and York have been intentionally excluded.

The exhibit aims to promote narrative change by introducing learners of every age and background to the complex and expansive contributions that enslaved African Americans have made to our understanding of, and inextricable relationship with, the natural environment.

The curators also recognize the support of the Harriet Tubman Learning Center to the success of this exhibit.

“This online exhibit creatively merges compelling visual artwork, scholarly research, primary documents, a digital map, and embedded interviews with expert historians and original oral histories with the descendants of Harriet Tubman," said RJ Ramey of auut studio, an industry-leading digital humanities studio that helped to design exhibit. "The project’s exploration of the enslaved man York, for example, brings numerous direct entries to light from the journal of William Clark. An interactive map allows readers to locate the eight islands that, to this day, bear the name of York as they were named by the expedition.”

This project joins a recent movement within the United States and the world, seeking to amplify the voices of people of African descent who have been historically suppressed. For example, on October 17, 2021, the organization Black in Natural History Museums launched the Twitter campaign #BlackInNHM to begin sharing stories of enslaved people that contributed to current scientific knowledge and the evolution of natural history museums. "The Enslaved Naturalist" shares the same objectives: to highlight and celebrate individuals who have been historically excluded from natural history lessons.

Chavis and Gallo said they hope that educators, students, and amateur naturalists will all take something away from this exhibit. Educators will have access to resources that allow them to further diversify their educational materials, and students and young naturalists will be exposed to broader representation in the fields of natural history, botany, ecology, wildlife science, and conservation.

In the near future, the Mitchell Program will be partnering with like-minded organizations, such as the National Park Service and the Harriet Tubman Learning Center, to produce and distribute K-12 curriculum as a companion to "The Enslaved Naturalist" exhibit.

The exhibit will remain a work-in-progress. Moving forward, Gallo will mentor an undergraduate researcher through Mason’s Office of Student Scholarship, Creative Activities and Research (OSCAR). This student will have the opportunity to develop narratives about Black naturalists and expand the number of subjects covered by the exhibit.

"For two centuries, these naturalists did not receive the just rewards and recognition for their contributions," said Gallo. "Now is the time to acknowledge their place as early naturalists and rectify the way we teach about the great contributors to our modern world."