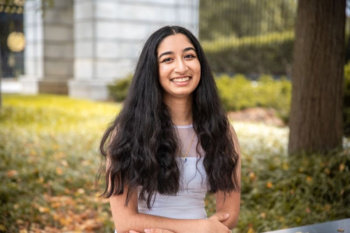 When George Mason Bioengineering undergrad Medhini Sosale was a child, she loved trivia and had a curiosity about everything around her. This knack for questioning her world led her to pursue a career in STEM research, and more recently, win the Barry Goldwater scholarship.

The scholarship is one of the highest rewards in the U.S. for undergrad students interested in developing STEM research careers, with winners receiving up to $7,500 annually. Sosale sees her win as not only helping her towards her career goals, but financially freeing up her time to delve into research more fully.

“I don’t really personally know many people who have pursued PhDs,” says Sosale, an Honors College student. “This scholarship offers a big community network of recent scholars and I’m excited to draw from this network, for general career advice and advice about graduate school.”

She says being inquisitive probably played a part for her in going after the scholarship. The application process has several steps, and Sosale made sure to start early and find out every detail she could about what she needed to submit. Although the application required one research essay, Sosale wrote two. She then worked with Karen Lee, her scholarship mentor, and other members in the Mason Office of Fellowships to decide which essay would work best.

Her essay work on research project Modelling Cerebral Blood Flow to Optimize Ischemic Stroke Treatment was the winning choice. The project focuses on studying the effects of various factors on ischemic stroke treatment. She also previously worked on a project with Parag Chitnis, assistant professor in Bioengineering, to develop a 3-D cell model that examines the barrier between the brain and the blood stream.

“I am very grateful to now be a Goldwater scholar,” says Sosale. “It definitely wasn’t a one - person process. There were a lot of people behind the scenes that helped me get here and I want to thank each and every one of them.”

The Barry Goldwater Scholarship and Excellence in Education Foundation was established by Congress in 1986 to serve as a living memorial to honor the lifetime work of Sen. Barry Goldwater. The Goldwater Scholarship Program identifies and supports college sophomores and juniors who show exceptional promise of becoming the next research leaders in the fields of engineering, mathematics, and natural science.