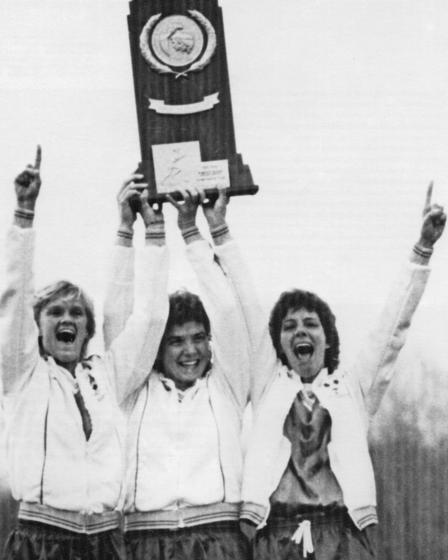 On Nov. 24, 1985, George Mason University women's soccer defeated North Carolina 2-0 to claim the first-ever NCAA National Championship at Mason. Pictured here from left, women’s soccer team members Sis Koskinen, Pam Baughman, and Meg Romaine lift the trophy. Mason was the host for the Final Four championship games, and the team played in front of a record crowd of 4,500. Baughman, who was voted MVP, said of the tournament, "I wanted to win the championship, but I really wanted my teammates and my coaches to be champions and they all deserved it. This was my motivation to work hard in training and to play my best in the games."

Find out more about the championship here. Read an interview with Baughman here.

Kim Crabbe played right fullback for the Mason women’s soccer team that season. It was during that championship game that she caught the attention of Anson Dorrance, head coach of North Carolina, the opposing team, who also happened to be scouting for the women's national team. In 1986, Crabbe became the first Black woman called up to the U.S. Women’s National Soccer Team. Read more about her story.