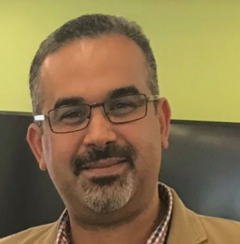 Mohamed Gebril is an associate professor in the Cybersecurity Engineering Department. He joined Mason after working as primary patent examiner for the US Patent and Trademark Office (USPTO). In his seven years at USPTO, he was involved in patent examination and prosecution areas in the data storage and networking fields, where he worked in intellectual property matters directed to computer security, enterprise network security and authentication, databases, data processing, and memory storage devices. Gebril completed his PhD in electrical engineering at North Carolina A&T State University in 2011 in the area of big data indexing, machine learning, and AI applications. He received his MS in electrical engineering from North Carolina A&T State University in May 2008 in the area of robotics navigation and optimization and completed his undergraduate studies in electrical engineering from the Alexandria University, Egypt