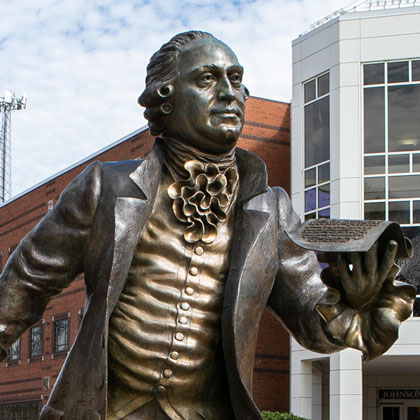 Served as VP for Information Technology and CIO at Mason for sixteen years. Then as Interim President and Provost at Mason Korea. While holding the CIO position, received multiple “Excellence in Technology” awards from the Virginia Governor’s Office and awards from Computerworld, EDUCAUSE, Information Week, the Computer Security Information Executives Association, the March of Dimes, etc.

Published more than 100 presentations in the US, Europe and Asia on various topics in technology, globalization, libraries, leadership, women in science, and organizational change and development. Produced or participated in about twenty television and media programs. Over 15 publications in English and Chinese on topics in Information Technology, Libraries, and International Partnerships.

Service activities include the multi-year chairperson of the Microsoft Higher Education Advisory Group and the Co-Chair of the EDUCAUSE/Internet2 Security Task Force; while serving as Chairperson of the Cybersecurity Working Group of the Southeastern Universities Research Association. Served for many years on the board of Technology Goddesses, a group that works with Girl Scouts to enhance technology interests and skills.

Since 1998, worked for GMU-IF, a non-profit that manages spectrum and utilizes the funds received to enable revenue producing projects at Mason. At the state level, worked for the state of Virginia’s Council on Technology Services, an advisory group to the Secretary of Technology, the I-Gov Advisory Committee for the Virginia Legislature’s Joint Commission on Technology and Science, and the Virginia Governor’s Task Force on E-Communities