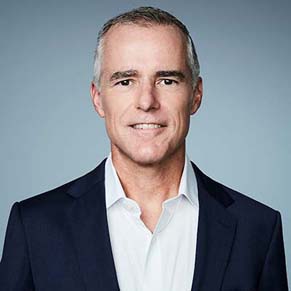 Distinguished Visiting Professor Andrew McCabe has a lifetime of service within the Department of Justice, both in the field and as an executive. He brings that experience with him to the Schar School of Policy and Government.

McCabe is an attorney who joined the Federal Bureau of Investigation as a special agent in 1996 and was on the bureau’s SWAT team for a while. In 2003, he became a supervisory special agent, and was promoted to various positions of increasing responsibility over a decade. Nearing the end of his tenure with the FBI, McCabe was promoted to deputy director in February of 2016, and served as acting director of the FBI after James Comey’s dismissal by President Trump.

McCabe began his career in the FBI field office in New York. Once promoted to supervisory special agent, he oversaw the Eurasian Organized Crime Task Force. He has served in other high-profile roles within the bureau, such as the FBI Counterterrorism Division and the FBI National Security Branch. He was also a part of the investigation of the 2013 Boston Marathon bombing and secured the arrest of Ahmed Abu Khattala for his suspected involvement in the 2012 Benghazi attacks.

McCabe is married to Jill McCabe, a pediatrician who ran for a Virginia state senate seat in 2015. They have two children.