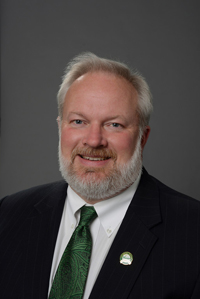 Dean College of Engineering and Computing

Kenneth Ball was appointed Dean of the Volgenau School of Engineering in August 2012. He previously served as the L.S. Randolph Professor and Head of the Department of Mechanical Engineering at Virginia Tech from 2004-12, overseeing rapid growth in the department with research expenditures increasing five-fold to approximately $20M, and with large increases in student enrollment. Prior to his appointment at Virginia Tech, he served for 15 years on the mechanical engineering faculty at The University of Texas at Austin, where he was the Temple Foundation Endowed Faculty Fellow in Engineering. He is recognized internationally for his research in computational fluid dynamics and heat transfer. He has chaired three international conferences, is a past associate technical editor of the ASME Journal of Heat Transfer and has served on several other engineering journal editorial boards. He is very involved in engineering program assessment and accreditation activities, both in the U.S. and internationally, particularly in the Middle East. Ball has supervised 13 PhD dissertations and 29 MS theses. He has obtained externally sponsored funding (excluding high-performance computing grants) in excess of $20M for projects and program development in mechanical engineering, including the thermal/fluid sciences and nuclear engineering. The estimated commercial value of his supercomputer grants is in excess of $10M.