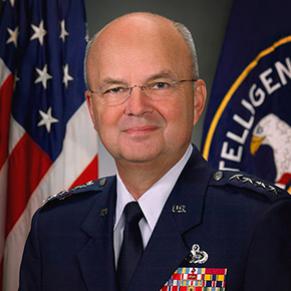 General Michael Hayden is a retired four-star general who served as director of the Central Intelligence Agency and the National Security Agency when the course of world events was changing at a rapid rate. As head of the country’s premier intelligence agencies, he was on the frontline of global change, the war on terrorism and the growing cyber challenge. He understands the dangers, risks, and potential rewards of the political, economic, and security situations facing us. Hayden dissects political situations in hot spots around the world, analyzing the tumultuous global environment and what it all means for Americans and America’s interests. He speaks on the delicate balance between liberty and security in intelligence work, as well the potential benefits and dangers associated with the cyber domain. As the former head of two multibillion dollar enterprises, he can also address the challenges of managing complex organizations in times of stress and risk, and the need to develop effective internal and external communications.

In addition to leading CIA and NSA, Hayden was the country’s first principal deputy director of national intelligence and the highest-ranking military intelligence officer in the country. In all of these jobs, he worked to put a human face on American intelligence, explaining to the American people the role of espionage in protecting both American security and American liberty. Hayden also served as commander of the Air Intelligence Agency and director of the Joint Command and Control Warfare Center and served in senior staff positions at the Pentagon, at U.S. European Command, at the National Security Council, and the U.S. Embassy in Bulgaria. He was also the deputy chief of staff for the United Nations Command and U.S. Forces in South Korea.

Hayden has been a frequent expert and commentator on major news outlets and in top publications, valued for his expertise on intelligence matters like cybersecurity, government surveillance, geopolitics, and more. He was featured in the HBO documentary Manhunt, which looked at espionage through the eyes of the insiders who led the secret war against Osama bin Laden, and in Showtime’s The Spymasters, a detailed look at the directors of the Central Intelligence Agency.

Hayden is currently a principal at the Chertoff Group and a Distinguished Visiting Pprofessor at the George Mason University Schar School of Policy and Government. He is on the board of directors of Motorola Solutions and serves on a variety of other boards and consultancies. In 2013, the Intelligence and National Security Alliance (INSA) awarded Hayden the 29th annual William Oliver Baker Award. He is also the first recipient of the Helms Award presented by the CIA Officers’ Memorial Foundation. In 2014, he was the inaugural Humanitas Visiting Professor in Intelligence Studies at Oxford University in the United Kingdom. His memoir, Playing to the Edge: American Intelligence in the Age of Terror, has been a New York Times best seller.