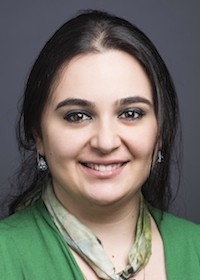 Margarita Tadevosyan is a George Mason University alumna. She received her MA degree in Peace Operations Policy from the School of Public Policy in 2010 through the Edmund Muskie Graduate Fellowship program. She also received a Certificate in Peace Research from University of Oslo, Norway. In addition she holds an MA in Conflict Analysis and Resolution and a BA in Sociology from Yerevan State University. Before joining S-CAR, Margarita worked at the Political and Economic Section of the United States Embassy in Yerevan. Margarita has extensive exeperience in peace and reconcilation work in the South Caucaus. Since 2012 she has been facilitating Georgain-South Ossetian reconciliation dialogues together with S-CAR faculty Dr. Susan Allen.

Margarita was also part of the editorial team that was working on the Armenian translation and printing of the book by George Mason University Institute of Conflict Analysis and Resolution faculty Sandra Cheldelin, Daniel Druckman and Larissa Fast: Conflict: From Analysis to Intervention. In 2005, she directed and filmed a documentary on Nagorno Karabakh Coflict with the State Radio and TV Academy of Armenia.