Helping students advance, one coach at a time 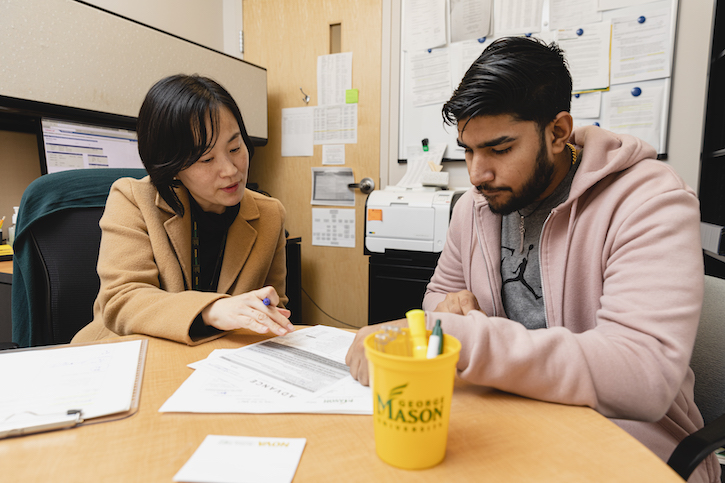 Her current caseload of about 350 includes online students, adult learners, student-parents, international students and more. ADVANCE has four success coaches, including Kim, and two more are expected to start this spring.

Part of Kim’s job is to guide students and help them stick to their degree plan. But her role doesn’t stop there.

“I try to pay attention to questions students ask, or stories that they share so that I can identify specific support that students will need,” she said.

This means that when a student shares a personal anecdote—explaining that he was late because his child’s babysitter fell through or that she’s unsure about what she wants to do after graduation—the wheels in Kim’s head are turning, and those conversations turn into opportunities to point out resources, such as child care options, or have a discussion about self-assessment and self-interest tools.

“We look at the whole person,” said Kim. “It’s not just about academics—that’s definitely part of it. It’s about life. We try to empower students to remove barriers…every student’s knowledge varies, and meeting them where they are is key to providing support.”

Kim should know. She began her own higher education journey at NOVA and later transferred to Mason, earning her BA in psychology in 2003. She also has an MEd in curriculum and instruction and a graduate certificate in English as a second language, both from Mason.

“I grew up in an immigrant family, so navigating college in the United States was just daunting,” she said. “I try to put myself in the shoes of students because I went through that process.”

Nothing like the ADVANCE Program existed when Kim was pursuing her bachelor’s degree. Now just over a year old, ADVANCE is one of the first programs of its kind.

An aligned curriculum for specific majors ensures that students waste neither time nor money on excess credits at NOVA or Mason. Dedicated support staff, including Kim, guide the students every step of the way.

That highly focused support that the coaches offer is one of the reasons the program has been successful, according to Ashlie Prioleau, executive director of ADVANCE.

“There’s one source that’s telling students how to go from point A to point B consistently,” said Prioleau. “The success coaches are generalists, but they also have to be the masters over their students’ experience as well.”

Given the diversity of the ADVANCE students Kim has seen so far, she’s learned that creating a trusting relationship is the one universal key to being a successful coach.

“It’s important to understand students’ prior experience, identify their potential roadblocks, anticipate student needs,” she said. But a success coach can only take students so far, she added

“I feel very rewarded when students actually exercise their autonomy and do research about…the topic discussed during our coaching session. Because coaching is not just about providing the information…but also [students] taking initiative of what they want to do.”