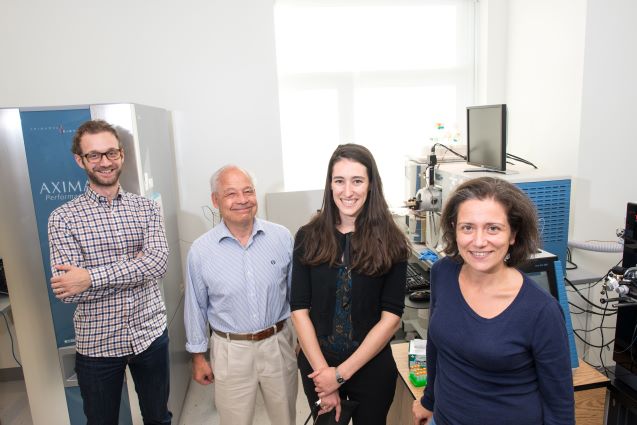 The research project, which was led by Alessandra Luchini, has been formally approved by the Food and Drug Administration’s Institutional Review Board after demonstrating its effectiveness among a cohort of 408 patients.

“There are many controversies surrounding Lyme disease,” said Luchini, the project’s principal investigator and an associate professor in the School of Systems Biology within Mason’s College of Science. “The state support has been essential for us to use our study to investigate the objective truth about sensitivity and accuracy about Lyme disease testing to help the citizens of Virginia and worldwide.”

Luchini said that Mason is uniquely qualified to offer the test, citing the novel technology she and her team have developed and the high-tech laboratory certified for its reliability, accuracy and timeliness that is being used by Mason’s Center for Applied Proteomics and Molecular Medicine (CAPMM).

The College of Science provided two new mass spectrometry instruments that significantly increased patient testing capacity in the CAPMM laboratory directed by Lance Liotta, a professor within the School of Systems Biology and the center’s co-founder and co-director.

“Using mass spectrometry, we can see hundreds of thousands of protein fragments in the urine,” said Ruben Magni, a CAPMM research associate. “We developed a new software to sieve through the data and to identify protein fragments derived from tick-borne pathogens with high-stringency criteria.”

Luchini and her team have developed a method that detects molecules derived from tick-borne pathogens in the urine of patients. Molecules shed by pathogens are eliminated from the body through urine after circulating in the blood.

The study was funded by the Commonwealth of Virginia and the National Institutes of Health.

Lyme disease is the most common vector-borne disease in the United States, according to the Centers for Disease Control and Prevention (CDC). It is largely caused by the bacterium borrelia burgdorferi and is transmitted to humans through the bite of infected blacklegged ticks, also known deer ticks. Typical symptoms include fever, headache, fatigue and a skin rash. If left untreated, the infection can spread to joints, the heart and the nervous system.

The idea of a urine-based Lyme disease test originated few years ago when a high school student participating in Mason’s Aspiring Scientists Summer Internship Program, Temple Douglas, asked Luchini and Liotta to work on a test for Lyme disease, which had caused terrible suffering for her family members. Now a post-doctoral fellow at the University of Pennsylvania, Douglas used a nanotechnology invented by the Mason scientists to develop a test that detected one protein derived from borrelia burgdorferi. The nanotechnology used in the test has been licensed to the Virginia-based company Ceres Nanosciences.

The early stage of the project was supported by the state through a Virginia Biosciences Health Research Corporation (VBHRC) grant that began in 2017, with trials beginning the following year. Since then, the Mason scientists decided to use mass spectrometry to expand the capability of the test to simultaneously measure thousands of proteins derived from all tick-borne pathogens, including Borrelia, Babesia, Rickettsia, Anaplasma, etc.

“Our goal is to expand the study to a statewide testing service, a clinical survey trial for which any doctor and any patient in Virginia can volunteer,” Luchini said.