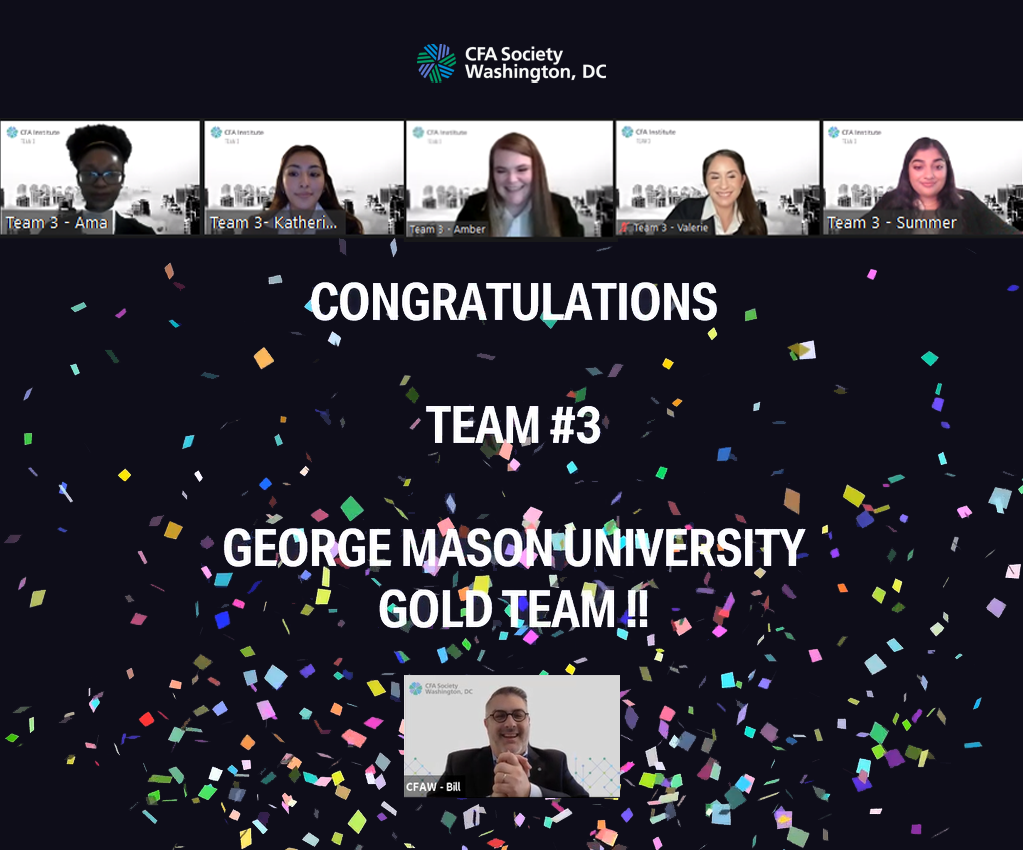 Amber Wilkins, a junior at George Mason University, transferred from Northern Virginia Community College in the middle of the pandemic. She wasn’t able to meet people and make friends or get involved in school activities the way she would normally.

And then came the CFA Washington Ethics Challenge. The opportunity, as Wilkins put it, allowed her to meet in a virtual environment with a group of four other students also interested in finance to work for a month on a competition. In the process, Wilkins said, she made friends and had fun in a subject that interests her.

Her team, which competed in a virtual environment in March, also came in first place over two challengers, another group from Mason and a group from Johns Hopkins University.

“I thought it would be a cool opportunity, and it really was,” said Wilkins, a School of Business student with a concentration in finance. “Overall, it was a fantastic experience. For some reason, our group was just all on the same page and wanted to work hard and really supported each other. And then when we won, we got to see that hard work really does pay off.”

Wilkins said she enjoyed the friendly working atmosphere, especially in a pandemic.

“We made a point of keeping our cameras on while we were working together so that we could see each other and have some interaction,” said Wilkins.

The CFA Washington Ethics Challenge, in its inaugural year, presented local finance students with the opportunity to examine a case containing several ethical dilemmas and then present their analysis and advice to a panel of judges. Steve Pilloff, associate professor of finance, mentioned the competition to his students hoping some of them would be interested in participating.

To his surprise, there was enough interest to create two teams—Mason Gold and Mason Green.

“I’m really proud that so many Mason students chose to participate,” said Pilloff. “Despite the pandemic, these students are moving forward with their lives. They saw an opportunity to do something challenging, and they seized upon that opportunity.”

For the competition, each student group presented their analysis for 10 minutes. During the week before, Pilloff sat in virtually on some of their practices. Pilloff added that all the students showed enthusiasm for the competition and dedicated their time to working as a group.

Summer Nasir, another finance student and member of the winning team, said she appreciated looking at ethical challenges she may face during her career.

“At Mason, we talk a lot about ethical questions, so it’s obviously really important to understand,” said Nasir. “I liked thinking about these questions and trying to answer them as a way to help me better understand what to do when I face ethical dilemmas in my career.”

The other members of the winning team were Valerie Mayer, Katherine Vargas Medina and Ama Obeng.

Mason finance students also competed in the CFA Research Challenge, which was sponsored by CFA Virginia. Pilloff said that competing in any of the challenges provides students with opportunities to further develop and showcase their skills to an audience of finance professionals.

Pilloff expects Mason students to participate in the ethics challenge again next year.

“We got a big trophy, but we only get it for a year, so next year, we’re going to have to defend it,” said Pilloff.